Among the Sleep Review

In Among the Sleep you take the role of an infant or really young child which is something completely unique from any other title. This is performed perfectly well and you really will feel like you've taken this perspective as you progress through the story as it sinks into a dark and mysterious dreamscape land. Now, the strongest overall element of this game was the message it was trying to convey that became hauntingly more apparent as the story progressed. It was really twisted to see this happy world slowly grow darkened and more wild as this child experienced this world. You could clearly see that from the teddy bear being a light in the darkness and the constant showing of empty alcohol bottles present in the world. It started out as your characters birthday and you ventured through the house as it began to transition into something that was a lot more imaginative. I loved this level of transition though it was really haulted by the very short length of the game. I'm quite torn with this matter as despite it being short, the game itself was a great play with an emotional message that other games don't try to provide. So onto the actual story, you have the basic controls of this young child with some small ability to run though you really need to use hiding to your advantage at times in the story. There's a good amount of horror sequences present as you attempt to solve some minor puzzles while making your way through old memories to capture a particular element of said memory. This will allow you to continue and power up the machine while being chased a lot of the time by a monster that only grows in darker shriek tones. There were also a ton of little side things that could be manipulated in the world and those were very entertaining to throw around. I especially loved the interaction with your teddy that acts as a friend and guide through despite me initially expecting him to be evil.

Like stated previously everything runs well and the perspective of this young child is performed perfectly. I felt the emotion and fear that this kid had with the teddy being my only fiend in this situation. The world looks beautiful with this horrific transforming dreamscape. The horror areas were somewhat wasted at times because they really weren't quite as developed as I would have liked them to be. Mechanics were perfect and the puzzles featured throughout really didn't take too much though, or well that kid wouldn't have been able to figure out anything. 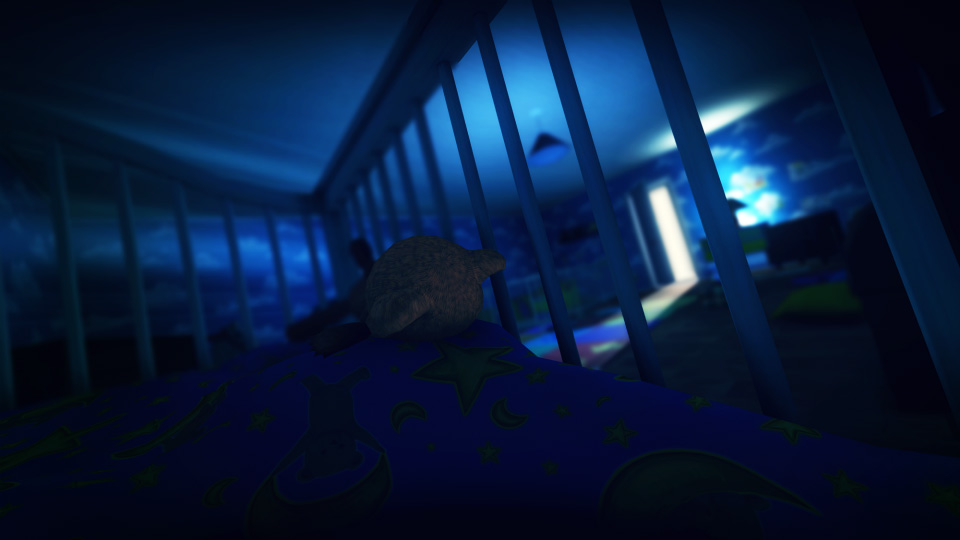 Among the Sleep is well worth it for this unique experience. The story was well devised despite being short and concluded with much satisfaction. I felt bad for these characters and could at a certain point see the sad direction that it was turning. It does a spot on job of putting you into the shoes of this young kid stuck in turmoil with even the best of memories being clouded by sad and dark moments all around. So get ready to escape with the help of your friendly teddy as he glows the world and guides you towards a safe light at the end of the tunnel. It`s a lovely story that you should definitely experience.

Among the Sleep for PC
Review code provided by Krillbite Studio