"Aliens and Some Air Hockey"

Playing this Shufflepuck I had almost immediately wondered if this had been on a mobile platform previously due to its style of play. Upon going out and researching the history of this title it indeed was mobile before coming over to the PC, actually even further it has a rich history of this being a current reboot. Anyways aside from that quick catch up I felt that the mouse was the definite form of control for this shufflepuck which is essentially air hockey in space. Air Hockey resonates for me more as that is something I actually quite enjoy and play whenever a table is available at wherever I may be. The game certainly looks fantastic and plays really well, it's just something that I find to be really boring. That may come across as though it is an opinion of sorts, but I really seem to find that it seems slightly boring to play as it is just slapping the mini disk across the table. It honestly fits better as a mobile experience despite the general mouse being the most fit for controlling the pad. The story itself is fairly simple as you have crashed your spaceship during whatever mission you had been on and need some sort of part. This is where it turns all Phantom Menace and you need to earn some space credits by competing with some aliens. From there you unlock higher levels of this space cantina that also is reminiscent of Star Wars and find further sets of alien creatures to battle. They of course each have their own special skill sets and little tricks that help them bring some challenge to you on the shuffleboard. Some of these are actually quite ridiculous, but add a nice layer of difficulty as you progress throughout. Originally being a mobile game it has short matches that can be played with repetition though this may not work so well on a desktop where things tend to be more dragged out. After playing a many matches; whether that be straight duels, bets or survival matches which are all fairly quick and last a couple minutes. With these points you are able to buy extra levels, pucks or items and of course biographies for characters so that you may enlist them for the rebuild of your ship. 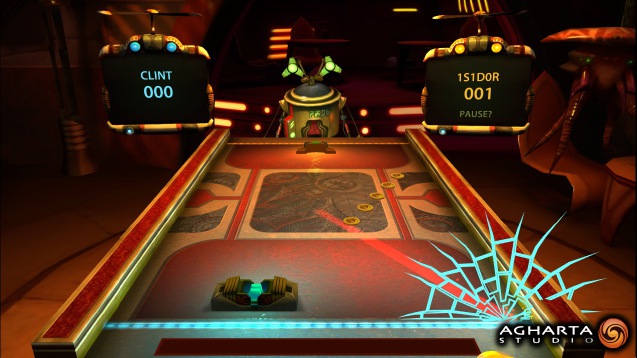 Everything plays really well and looks greatly detailed with a smooth environment. Each of the differing characters has something special to them and I really did enjoy the variety of characters. Special abilities also spice things up as you can get mini powerups to use or on the occasion you must face random game changes mid match. There's also a small slot machine to visit from time to time for extra stuff, thought I might as well throw that in there as a hint. 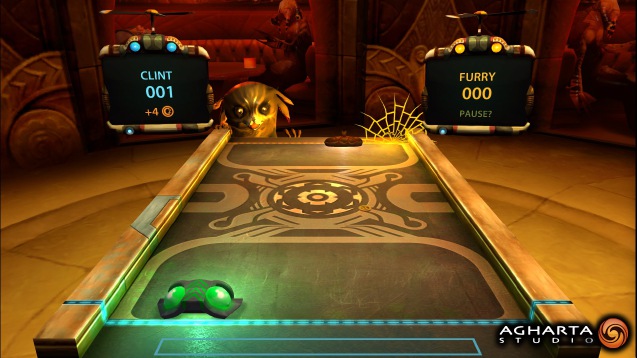 Shufflepuck Cantina Deluxe definitely looks great for the minimal style and provides a number of differing Shuffle battles for you to participate in. It's relly how into shufflepuck you are in letting it transfer over to the desktop instead of being a quick time filler. It may not be for all, but what it's designed for it performs very well with no issues. A final note is that Shufflepuck is to eventually be usable through the magical Oculus Rift which I think would make the experience even more intense.
Shufflepuck Cantina Deluxe Gameplay 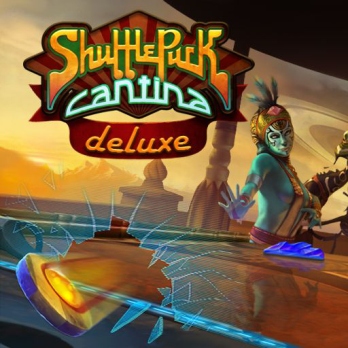