Atlas Reactor is a turn based PVP multiplayer game which is actually something I don't believe I've seen before, at least not done like this. Being on squads of four all players actually battle it out at the same time which is quite something. Players begin by selecting an attack option for which each freelancer (your chosen character) has a unique set of. After that's chosen you also have an option of moving around the map which is encouraged as players will be attacking your general previous area. The selection phase is fast in approach which does bring some tension to it and once everyone's locked in the actual attack phase begins. Players shoot out their abilities dealing damage or setting off their assist skills if they're one of the few support freelancers. Once this is done the characters then shift around and the next round of combat choices begins. It's actually well balanced considering the vast selection of freelancers and they've done a great job of keeping this exciting. Matches are first to five kills or most kills after twenty rounds of play. This keeps the matches moving relatively quickly so you can play a number of games instead of being locked into a long match.

Included are just a few maps that each bring a slightly unique play to them though they all feel similar. I was a bit disappointed by the lack of selection here considering the possible range of arenas though other similar games do get away with having a small set of maps. In comparison to that they actually have a huge roster of freelancers to choose between with great variations in their unique style and abilities for combat. For whatever reason Zuki was my choice of freelancer to mostly play as and with this class I played a more laid back approach shooting from the side as she'd often get quickly slaughtered if I went anywhere near direct combat. I'll also mention that freelancers can be customized with skins, taunts and other smaller options. These are unlocked through special points and in turn those can be unlocked by special packs you occasionally get while playing. 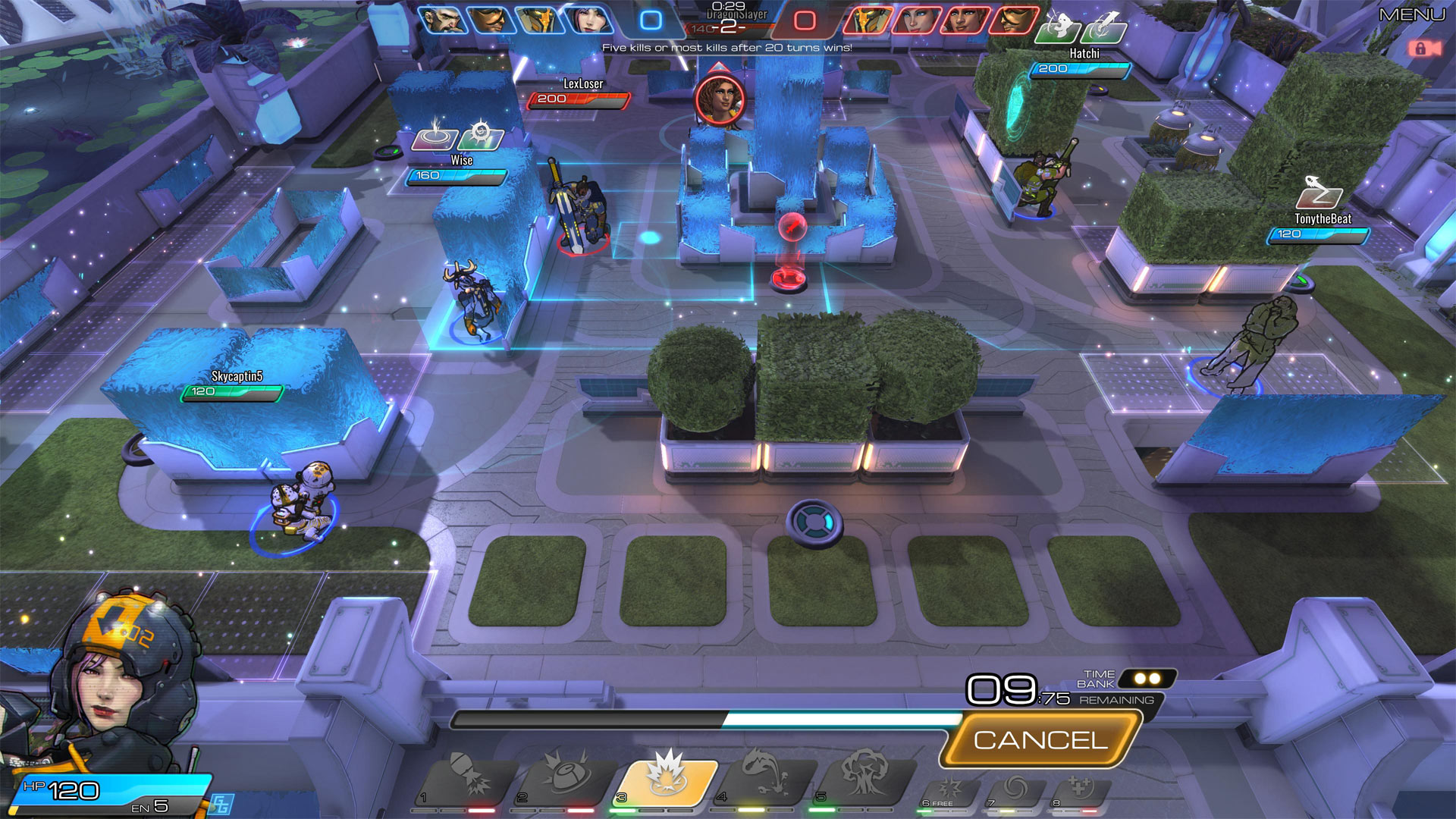 There are also Seasons to play which act as a bit of a story. They include some information that creates a background and offer rewards for completion. Each season is divided into chapters and within the chapters are a series of challenges for you complete. While it's not quite a campaign it does provide some extra things to aim for while playing and bits of story.

The game looks great having a slight cel shade style to it though still a very fun almost cartoon like look. The environments feature a futuristic tech design with bits of cover to tactically move between and some nice smaller particle effects. While they're simpler in look I did find that the core lanes of combat were efficiently done providing good amounts of conflict. It was also interesting in how freelancers could play around in the world bouncing shots off walls or using certain abilities to ignore cover. I felt that the turn based system was implemented well as that's usually a hard thing to get right and I never thought it would work well in a PVP multiplayer game. The movement was also well done offering simple location changes, some sneaky character escapes or even multi-step movement in case you need to directly avoid some deadly issues. Freelancers were also great not only having a large roster to choose between, but each providing a unique set of skills and for the most part some decent balancing. 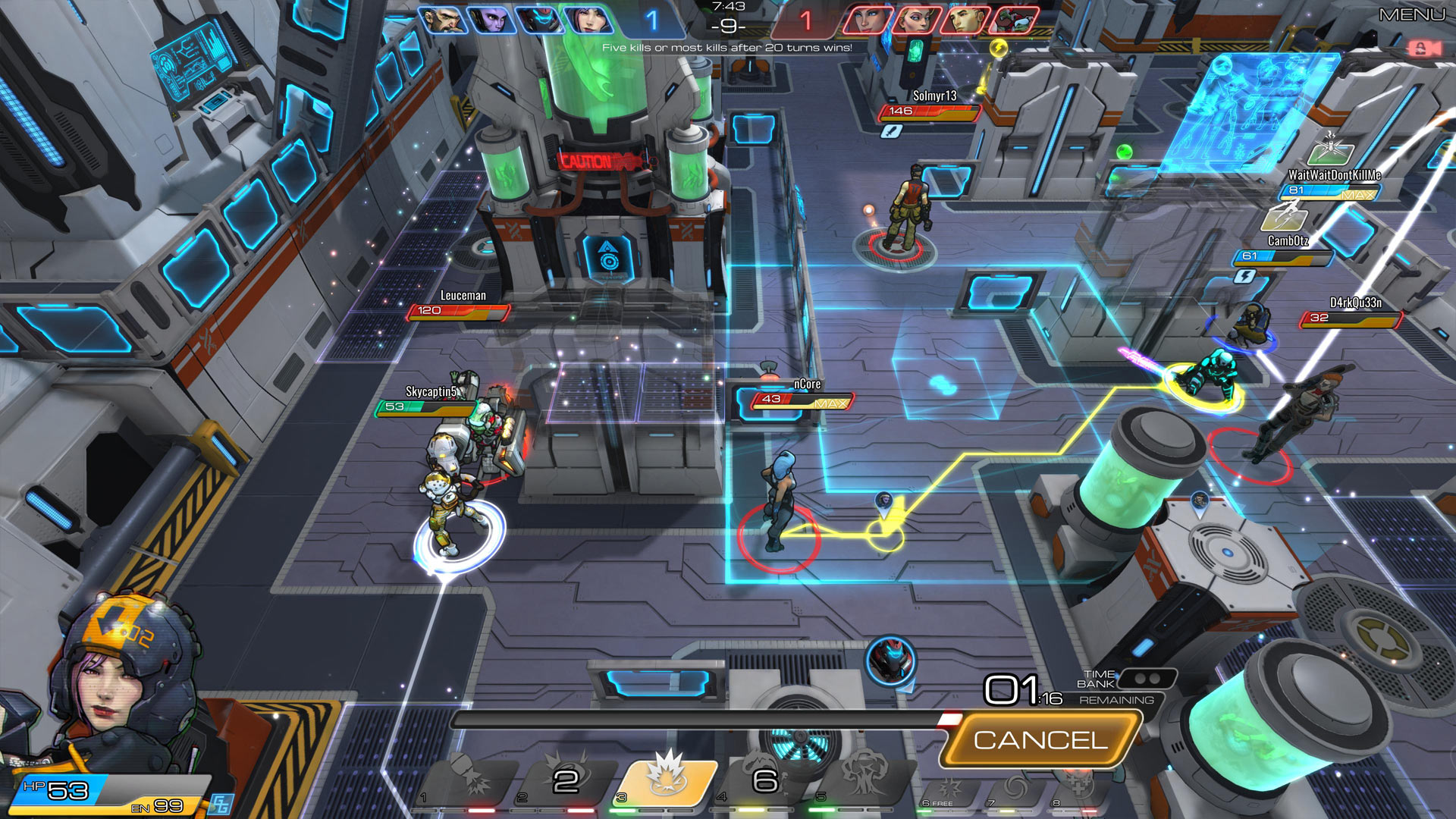 Atlas Reactor wasn't hard to pick up and it impressively managed to present turn based combat in a new exciting way. It might have been nice to see some more maps available or even a bit of more story development though as a free to play title it's solid. There's a great selection of freelancers available that all some quirky or fun bit to them and I'm sure there's a character for everyone. I certainly enjoyed the pace of the matches with them taking about twenty minutes each round and the action was always tense. This was definitely surprising as turn based titles are typically slower for tactical thinking whereas this one pushes you to make decisions. That not only quickens the pace, but creates a great sense of tension for you to assess the map with haste and pay attention to what's happening.