Aki: Boom Ball 2 is our tenth motion game. That’s a nice round number. It’s also a surprisingly large number. But I counted, and there it is! It feels like I should be seeing an achievement unlocking somewhere.

What were some of the key goals when working on a sequel to Boom Ball for Kinect?

Aki: The first game was intuitive, easy to approach and quick to learn. We wanted to stick to that, and make it playable with friends and family. Boom Ball 2 was intended to be a game for the holidays, so co-op play was very important, as was the cheerful, colorful tone.

How did the team come up with the various levels that feature funky shapes or special creatures? I’ll also mention that I found the one where you’re looking for a cat to be particularly hilarious.

Aki: he levels were designed by two awesome students, Kalle Rönkkö and Tom Nakari, who did their school internship with us. They were brimming with ideas, so we gave them tools to make Boom Ball levels, and the results are great. I have a feeling they’ll go on to make awesome games in the next indie wave.

On a practical level, the level designers started off by playing through the first game with a critical eye. The fun of a level doesn’t always come from how difficult it is. Often, it’s fun just because you’re blowing up stacks of cubes that look like cats, hamburgers, speedboats or dragons. So we said, go wild. Make silly jokes. No need to be serious all the time. 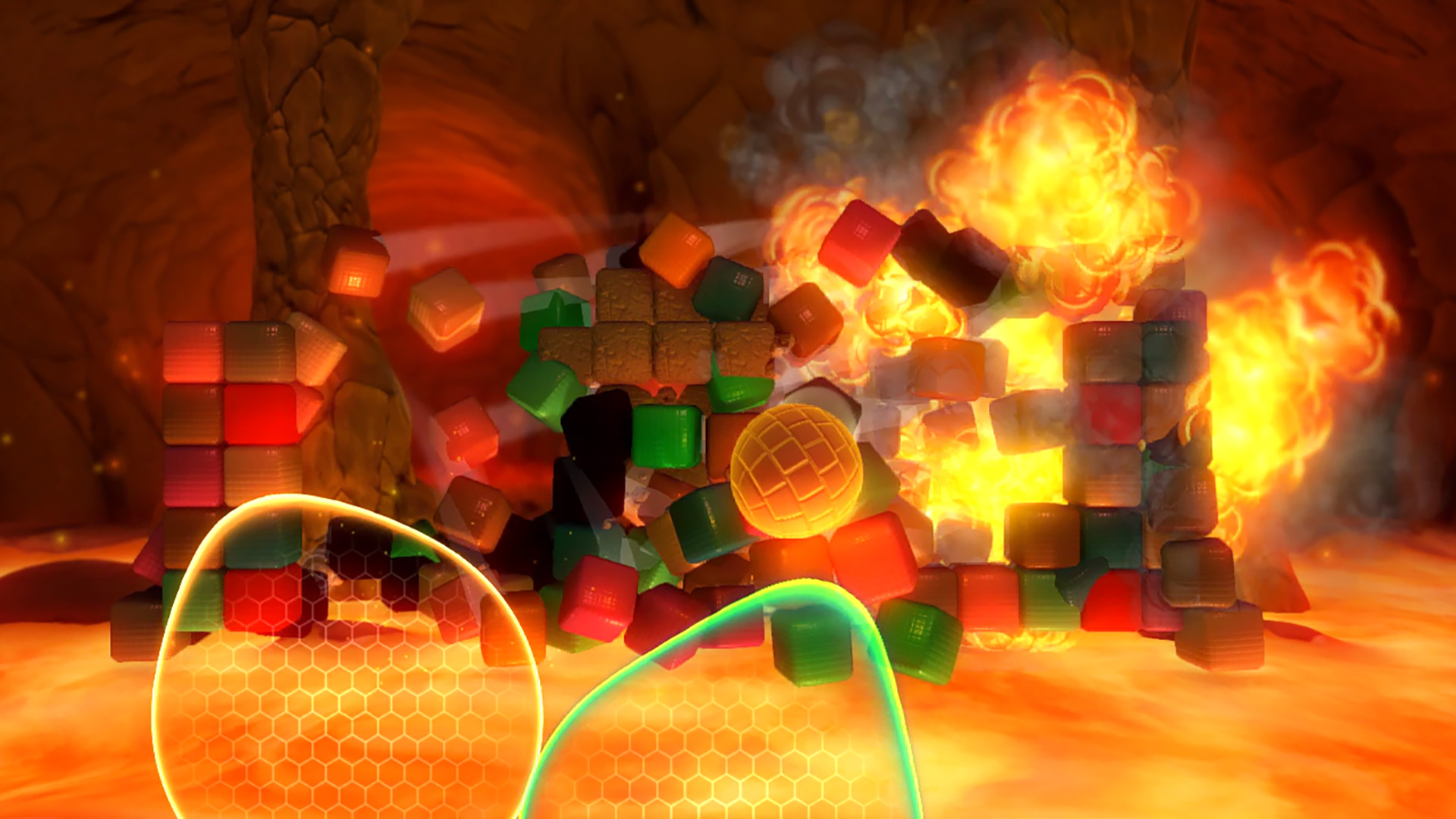 How were the themes for the various areas selected and how were the levels adjusted to fit within them?

Aki: The goal was that the game should feel like taking a fantasy vacation trip, a burst of color to break everyday monotony. We wanted to have five areas that would be very different from each other, and they would also need to be colorful and able to support various weather conditions to make things interesting within the same area too. We looked at the themes from the first game, and picked things that were in direct contrast with them.

Some ideas that we didn’t use included Grand Canyon, Ancient Greece, Mars and the Moon. They were different enough, but they didn’t quite bring that upbeat feel that we wanted to achieve. Mars, for example, can be beautiful, but it’s an austere beauty. And it’s always dusty and red, which makes variations difficult.

Music plays an important part too. Playing with the music off makes you frown in concentration, but listening to an upbeat tune makes you want to get up and have fun!

With coop being available on all levels how did that functionality work into the game and did it affect the design of any levels?

Aki: We knew right from the beginningthat we wanted co-op, so it was one of the first features to be prototyped. In Boom Ball 1, we had narrow and wide levels, but both of them had some issues in co-op. The narrow levels had players bumping into each other, and the wide levels caused the camera to fly around uncontrollably as it tried to follow two players wanting to go in different directions. So right from the start, we made the choice that all levels in Boom Ball 2 would be medium-sized to make them work equally well for both single-player and co-op. All levels were tested with one and two players as they were being built, so co-op wasn’t just something that was tacked on top later on.


Xbox and its future has changed considerably lately, have you considered working on titles that would be “Xbox Play Anywhere” so players could access them on Windows 10 or Xbox One? Would this sort of option be available with Kinect and additionally has the team recently discussed using Project Scorpio for future games

Aki: Windows 10 compatibility is an interesting thing, but I would assume that most people have their Kinect hooked up to their Xbox, not their PC. Most users of Kinect for Windows use it for development or research purposes, not gaming. So it’s not something we’re actively looking at.

As for Scorpio… if you hear anything about it, please let us know!

Can you tease any future projects that the team is working on?

Aki: We’re currently working on Air Guitar Warrior, which will be released in 2017. It will feature, among many other things, a quest for the legendary guitar-sword “Legend”, rideable dinosaurs, motorbikes, ghost vikings, aliens, demons, dragons, flaming guitars that shoot rockets and lightning, and Heavy Metal Zeus. Oh, and you’re in control of the music.