As a staple I would like to give you a chance to elaborate on Super Dungeon Bros for those that may not know much about the title.

Super Dungeon Bros is arock-themed cross platform dungeon brawler in the style of an action RPG. Featuring 1-4 multiplayer couch and online co-op, Super Dungeon Bros is best enjoyed as a multiplayer game. There is a single player campaign available for bros that play like to play on their own but the most enjoyment will come when playing with your friends. The game will support both on and offline co-op, so for example you can play with 2 friends on your couch and 2 friends online, or whatever set up works best for you. Coming to Xbox One, PS4, PC, Mac and Windows 10, Super Dungeon Bros will support cross platform multiplayer with Xbox One to Windows 10 and PS4 to PC/Mac.

Players will be able to choose to play as one of four heavy metal heroes, Axl, Lars, Freddie and Ozzie. Each has their own personality, Axl for example is a fight first, ask questions never type of guy, Lars is a lover not a fighter, and constantly in turmoil over his affections for the queen of Chillheim. Freddie doesn’t understand the concept of fear (or much else for that matter) and finally there’s Ozzie, the resident joker in the pack!

Super Dungeon Bros is played out in the fantasy universe of Rökheim, which contains 3 distinct worlds: Cryptheim (an underground dungeon complex where the dead are received and processed), Chillheim (a huge brewery built upon a natural brew geyser, surrounded by rigid, ice-covered peaks) and Bogheim (where sprawling jungles are filled with poisonous plants and animals). Players will look to seek out epic loot, fight hordes of evil undead and uncover the legends of long lost fabled rock stars! As co-op is the main focus of gameplay, there are plenty of opportunities to work with your friends to collect loot, battle enemies or just simply proceed throughout the dungeon. Players will be able to hurl their fellow bro like a human cannonball into swathes of enemies, or throw them up onto distant ledges to unlock trap triggers or collect gold. There are also plenty of bro-based moves like the game’s signature move, the Bro Nado, a whirling totem pole of death and destruction. Activate one of these and you can quickly clear the area of enemies! We’ll be releasing daily and weekly instanced dungeons as well as for players to plot their scores on the global leaderboards.

Just to go over platforms, which platforms are you targeting and will there be any cross-buy options available?

Super Dungeon Bros will be launching on Xbox One, PlayStation 4, PC, Windows 10, and Mac and will support cross platform gameplay with Xbox One to Windows 10 and PlayStation 4 to PC/Mac.

We haven’t announced any further specific details around the launch or additional formats as yet. 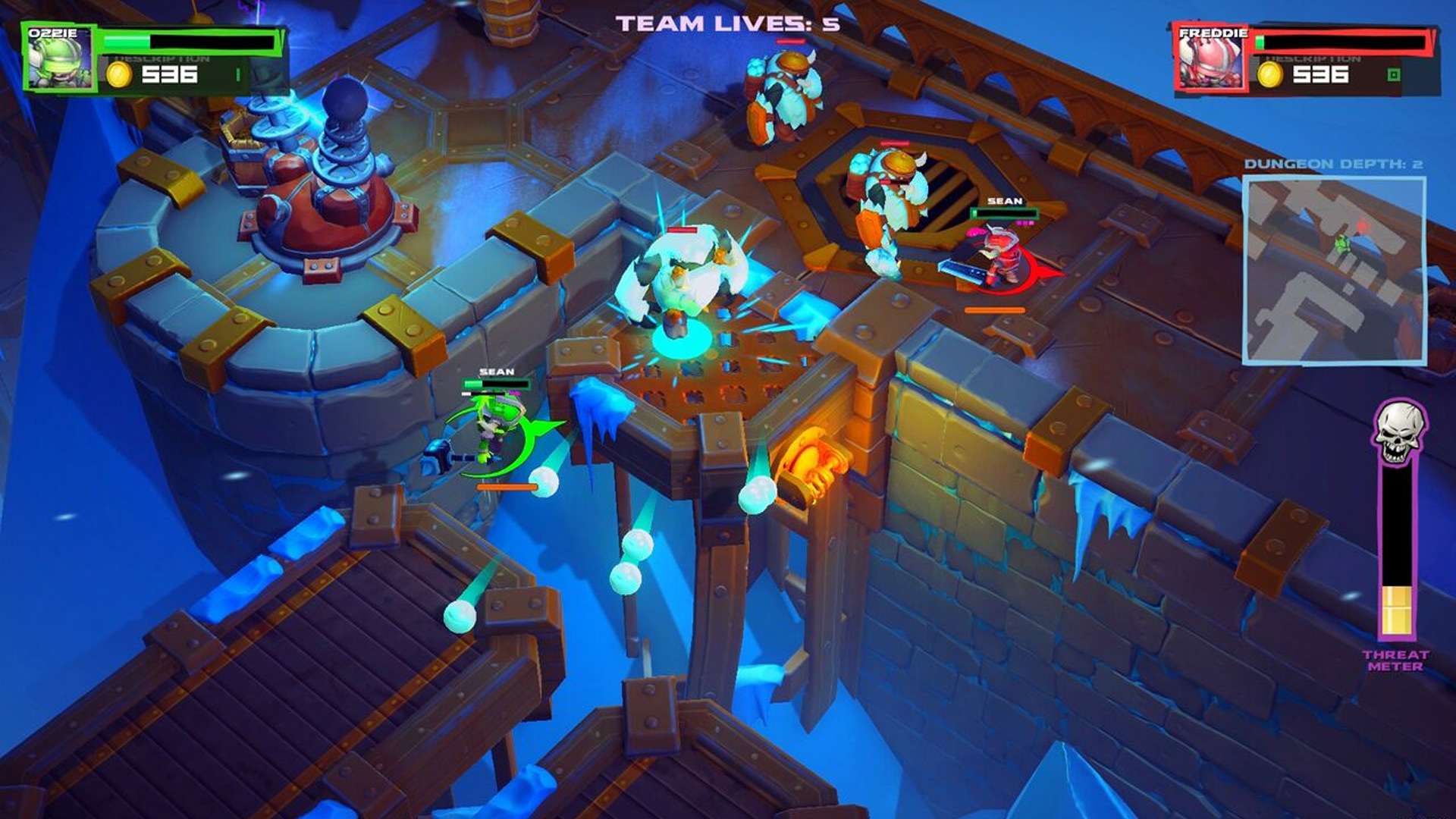 I see this is a four player cooperative adventure, what aspects will come into play when working together?

Super Dungeon Bros is all about the co-op gameplay. There will be a single player campaign available however the game will be best enjoyed when rocking it out with your bros either on or offline. You can play with up to 4 people at once and the games dungeons are scaled accordingly, so for example if you start a dungeon with 2, 3 or 4 players, each dungeon is built around the player count. If there are just 2 of you playing, the game will build dungeons for 2 players and so on. You’ll be able to play locally with friends as well as joining in an online session and can totally mix up the way you do this, i.e. 3 on the couch and 1 online for example. We’re really pleased about this as we appreciate it’s not always possible to have your mates around for a good old gaming session. We’re trying to make Super Dungeon Bros as accessible as possible. To emphasise the co-op nature, there are plenty of situations where you’ll need to rely on your fellow bros in order to progress further into the dungeon. For example, you may need to hurl one of your bros over a ledge to reach a trigger that will open a gateway or raise a bridge, or you may need to instigate a bro stack in order to reach some epic loot, and there are plenty of opportunities to use your bros as a weapon too, simply by tossing them into a crowd of enemies like a human cannonball.

What sort of dungeon like levels will we experience when going about together and I had heard they will be procedurally generating as well with progression?

Built in Unity 5 and one of the first games to make use of the Unity Networking feature, Super Dungeon Bros is procedurally generated, meaning each dungeon is created on the fly. The result is that players will never rock the same dungeon twice, creating a unique and fresh experience every time they jump into play!

Each world (Cryptheim, Chillheim and Bogheim) will be playable from the very start, allowing players the option to choose which dungeon to tackle first and each of these worlds has their own unique enemy types, mini bosses and end bosses. 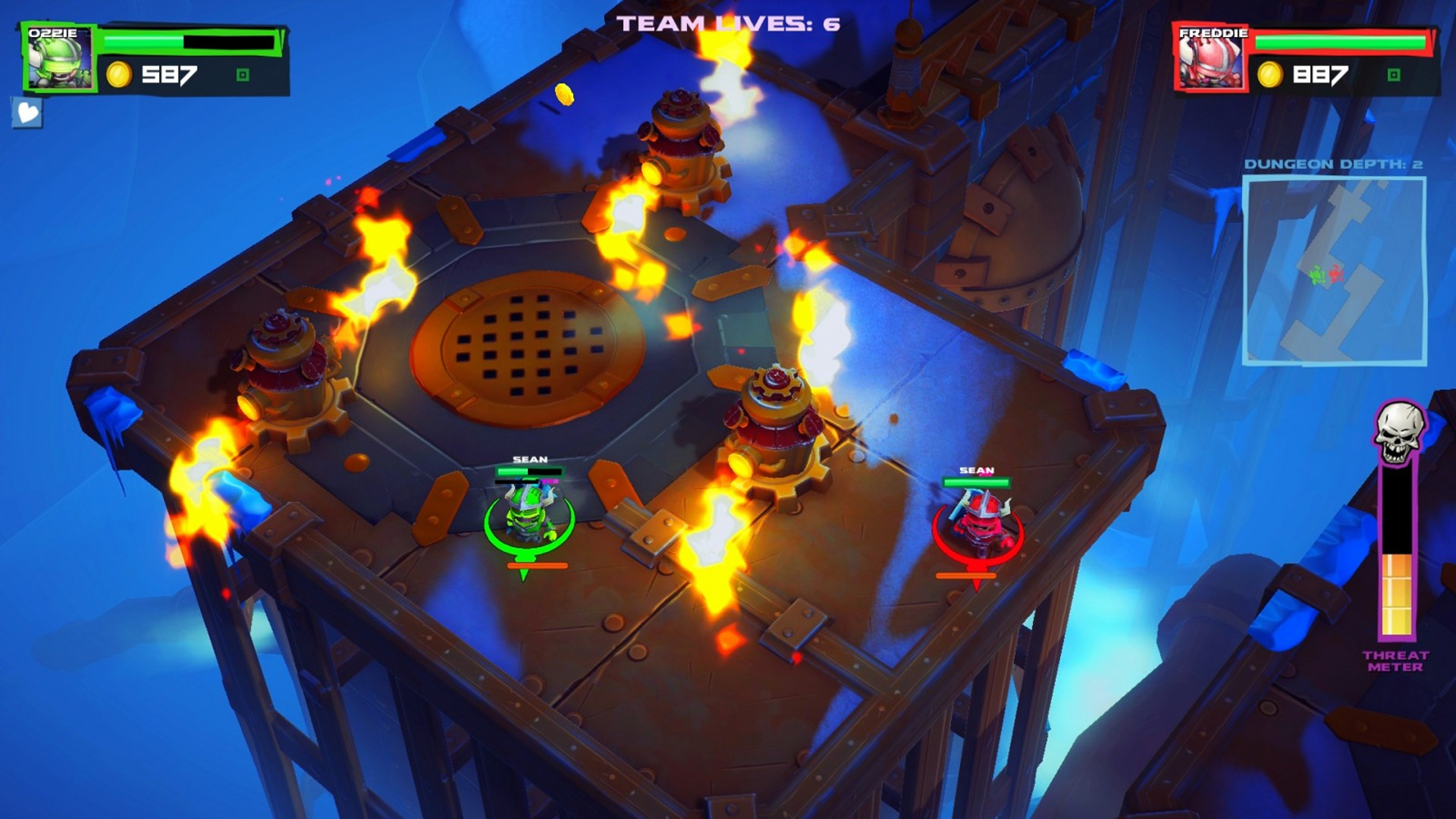 Could you discuss the various enemies and opposition we will face when dungeon crawling?

Super Dungeon Bros contains plenty of variation with the enemies and these are broken down into various roles, including Swarms (designed to attack the bros in large quantities), Muscle (the frontline enemy of Rökheim), Displacers (designed to affect any bros plan), Coordinators (requiring team coordination to battle) and finally supporters (designed to vastly increase the threat level of other enemies and provide a tougher challenge for our heavy metal heroes).

Saw some mention of possible bosses to battle together, what sort of larger enemies will we end up facing in the dungeons?

Each world will contain several mini boss battles as well as a final boss to encounter. The final bosses are pretty challenging and will take careful co-ordination to defeat. Again, the focus here is on creating a great co-op experience, so expect to be working with your fellow dungeon bros to take down the big guns. 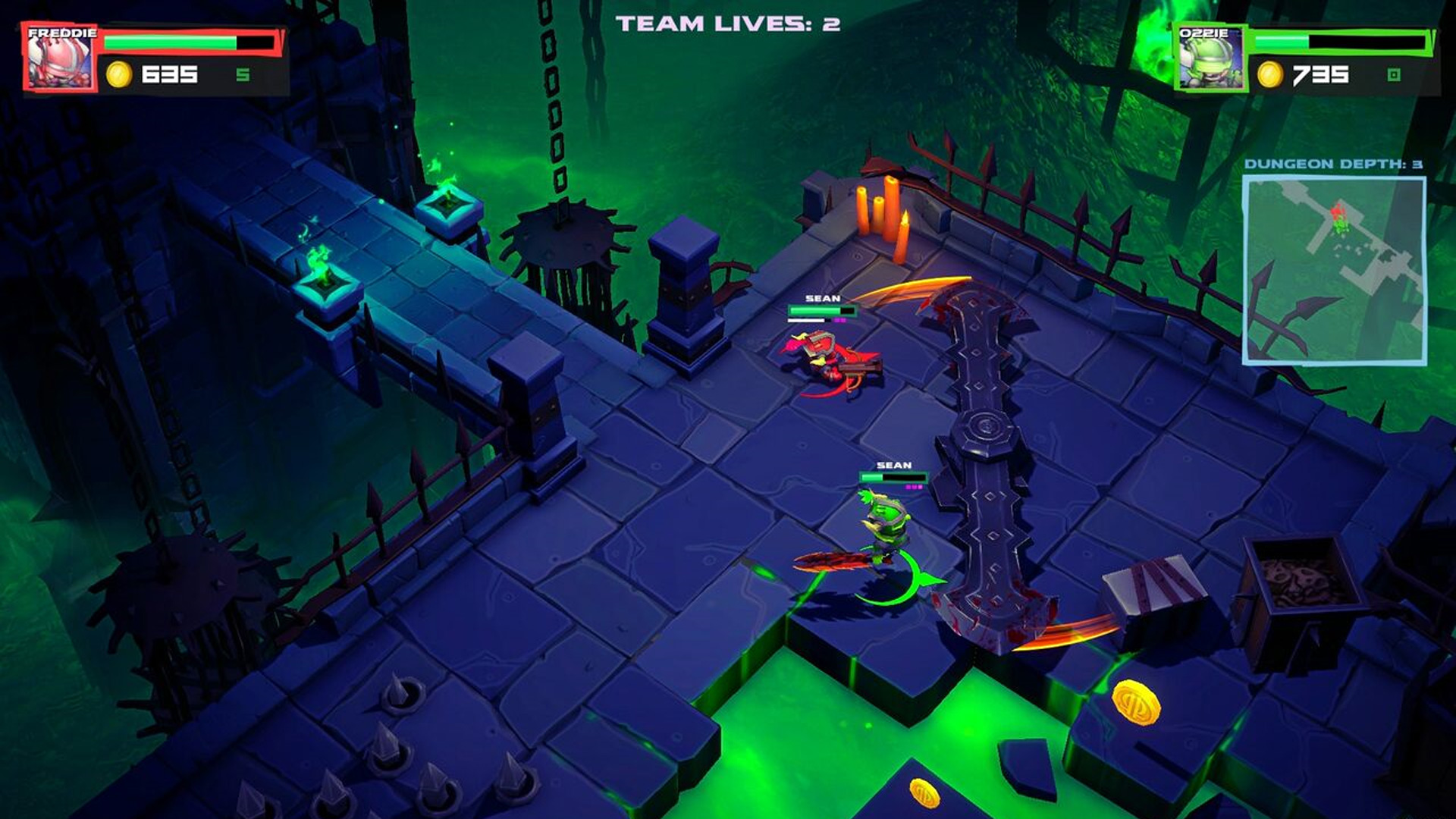 In regards to weapons and classes for players, how will this work along with what options will be available for differing play styles?

Super Dungeon Bros will have 4 weapon classes for players to choose from including melee (for those who like their combat up close and personal) as well as ranged (for those who like to pick off their targets from a distance),and these are broken down intoCrossbows, Hammers, Swords and Wands. Each weapon will carry its own special bro-op move, whereby all the bro’s will be linked together to form an epic attack. For example, the swords will allow players the chance to perform the games signature move, the ‘Bro Nado’, where you’ll become a whirling tornado of death and destruction. Other Bros will get sucked up into the Bro Nado creating 4 x the amount of devastation.

What sort of rewards will the cooperative dungeon team earn when moving through the various areas?

There are various rewards for bros to claim as they raid each dungeon complex. These include the standard gold currency (used to increase the bro’s weapon statistics) as well as purchasing buffs from the dungeons randomised store. There will also be shards to collect which will be used to unlock new weapons, skins and other fun collectables during a playthrough. There will also be rewards available to players who manage to make it through the dungeon and defeat the boss.

I would like to leave this spot open for anything you'd like to let the players know about the game that we might not have covered?

There is still an opportunity for fans to register their interest at www.superdungeonbros.com to be in with a chance of accessing the Exclusive BETA. Furthermore, we’re looking to involve the community as much as possible and as such have launched our own brocabulary – via the official Super Dungeon Bros website you can submit your own bro-words and they may just end up in the game (with the person responsible being credited!).