Aki: Virtual Air Guitar Company specializes in motion games. Not just because the technology is cool (it is), but because moving around is a lot of fun. Physical activity is fun, and it’s intuitive. We want to create experiences that enhance that primal joy of motion. This is the main theme in all our games, from the first Kung-Fu Live to Squid Hero today.

Anyone can play our games, even if they’ve never seen a gamepad. At the same time, we want to give players even more control than has previously been possible.

We believe that the only way to make a good motion game is to do something that’s not possible with any other control method. If a game would play better on a keyboard and mouse, then there’s no point in using Kinect.

Coming off of Boom Ball for Kinect and then working on Squid Hero for Kinect what were some of the goals the second time around in development?

Aki: We wanted to keep three things from Boom Ball: accurate hand control, active full-body gameplay, and a cartoony attitude. But we didn’t want to do another Boom Ball – not just yet. This time we wanted to have a main character in the game, so we could design interaction around that character and the environment.

Another important goal was to be able to play the entire game as co-op multiplayer. Kinect games are really great with a friend or family member at your side. Parents and kids liked Boom Ball, so now we wanted to create a game that lets them play together the whole time.

Moving from the release of Squid Hero for Kinect, what sort of experiences are the company going to work on next?

Aki: We will definitely continue to work with Kinect and Xbox One, but I can’t say yet what our next game will be. We’re prototyping a couple of fresh Kinect concepts but they’re still in the early stages. We’re working to get Boom Ball released in China, so that’s a big thing that’s happening in the future. We’d also like to do a sequel for Boom Ball, or another ball-bouncing game with a twist. And one day, when the time is right, Kung-Fu will return! 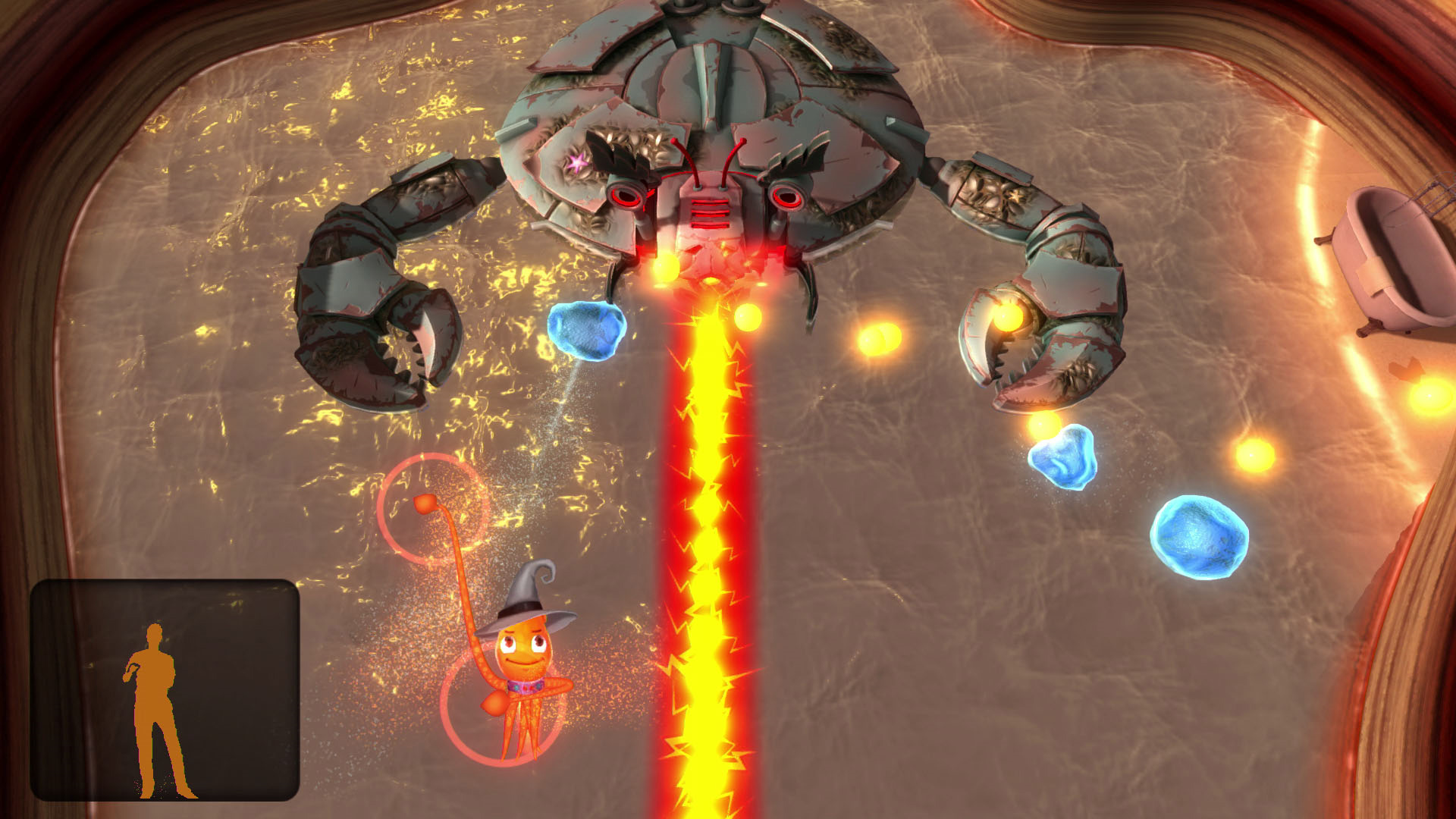 When working on the title what was the main inspiration that eventually led to Squid Hero for Kinect such as the storyline, squid hero and environments?

Aki: It was kind of a patchwork process. Boom Ball was partly inspired by Breakout, so we were looking into other classic arcade games. I created a quick test based on the Asteroids concept, except instead of shooting at rocks, you’d throw smaller rocks at them. At this point, we had circles for the player’s hands, some gray blobs that represented rocks, and a default blue background. Another programmer remarked that it sort of looked like ice rafts floating in the ocean.

And suddenly there were all these new ideas springing up. We could use fluid physics and neat water effects. The water setting made us try out an octopus, which then became a squid. We could travel around the world in oceans and rivers. At one point we had penguins that you could toss around and they’d bob up and down in the water, eating fish. That feature didn’t stick because it wasn’t much fun in the end, but it gave us the animals that need to be rescued from ice cubes.

That’s usually the way these things go. You don’t get much if you only design on paper. The first playable prototype, no matter how simple it is, always generates a bunch of new ideas. There’s not much of Asteroids left in the final game, but without that initial prototype we wouldn’t have gotten there.

In regards to the bosses you face, where did the inspiration for those particular creatures come from?

Aki: By the time we started designing the bosses, the game already resembled vertical scrollers more than Asteroids. Those old-school shoot-em-ups in arcades and on the NES always had the weirdest bosses, and I wanted to capture some of that essence. Squid Hero is set in rivers, so the thinking started leaning towards suitable amphibious animals… but then, what’s cooler than an animal? A giant robot animal with lasers of course!

How has the experience been so far in working with the Kinect 2.0 for Xbox One?

Aki: Kinect for Xbox One is great. It’s like the first generation but better. The tracking is more accurate and gets confused less often. The wider field of view is also a blessing, because you don’t need as much room and can stand a bit closer to Kinect. The two-player mode takes up more space, because we want the players far enough from each other so they don’t end up smacking each other, but without the wider field of view this wouldn’t even have been possible. 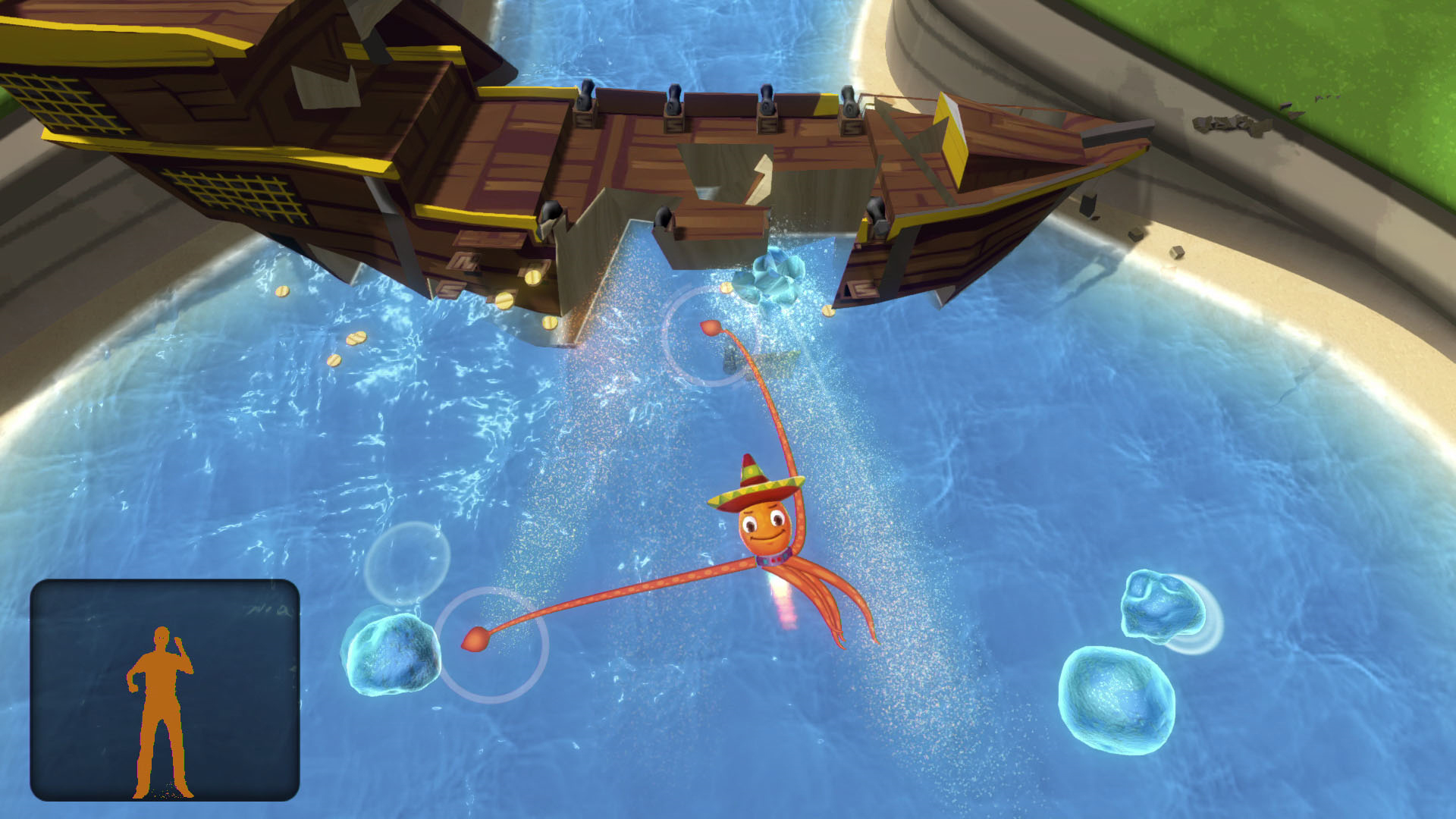 To further that how has the ID@Xbox system been for the team as independent developers?

Aki: We have nothing but good things to say about ID@Xbox. It’s wonderful that indies like ourselves can self-publish games without any middlemen. Simply put, if ID@Xbox didn’t exist, we wouldn’t be making Kinect games on Xbox One.

Aki: This one goes out to all of our players: We’re an independent developer, and we wouldn’t exist without you. Your support means that we can keep on making more and better games for Kinect.