I honestly thought the first Plants vs Zombies: Garden Warfare was a joke when it was first announced at the start of the generation, but the game quickly became one of my favorites and really exceeded my expectations. I've been long waiting the sequel ever since the announcement and was even more eager after trying it out at E3 2015. That was just a Garden Ops scenario playsession and the beta gives a wider variety of options to play. The game first opens up with a hub area which replaces the regular menu that is neat in presentation, yet somewhat annoying since I enjoy traditional menus and just want to search for a match. I won't say it's really a negative and I'm sure that many will enjoy the area as it has some free roam to it while acting like a portal to everything in the game though I'd prefer a regular menu. From this section the only current options aside from free roaming the hub are playing the two multiplayer modes current present in the game. 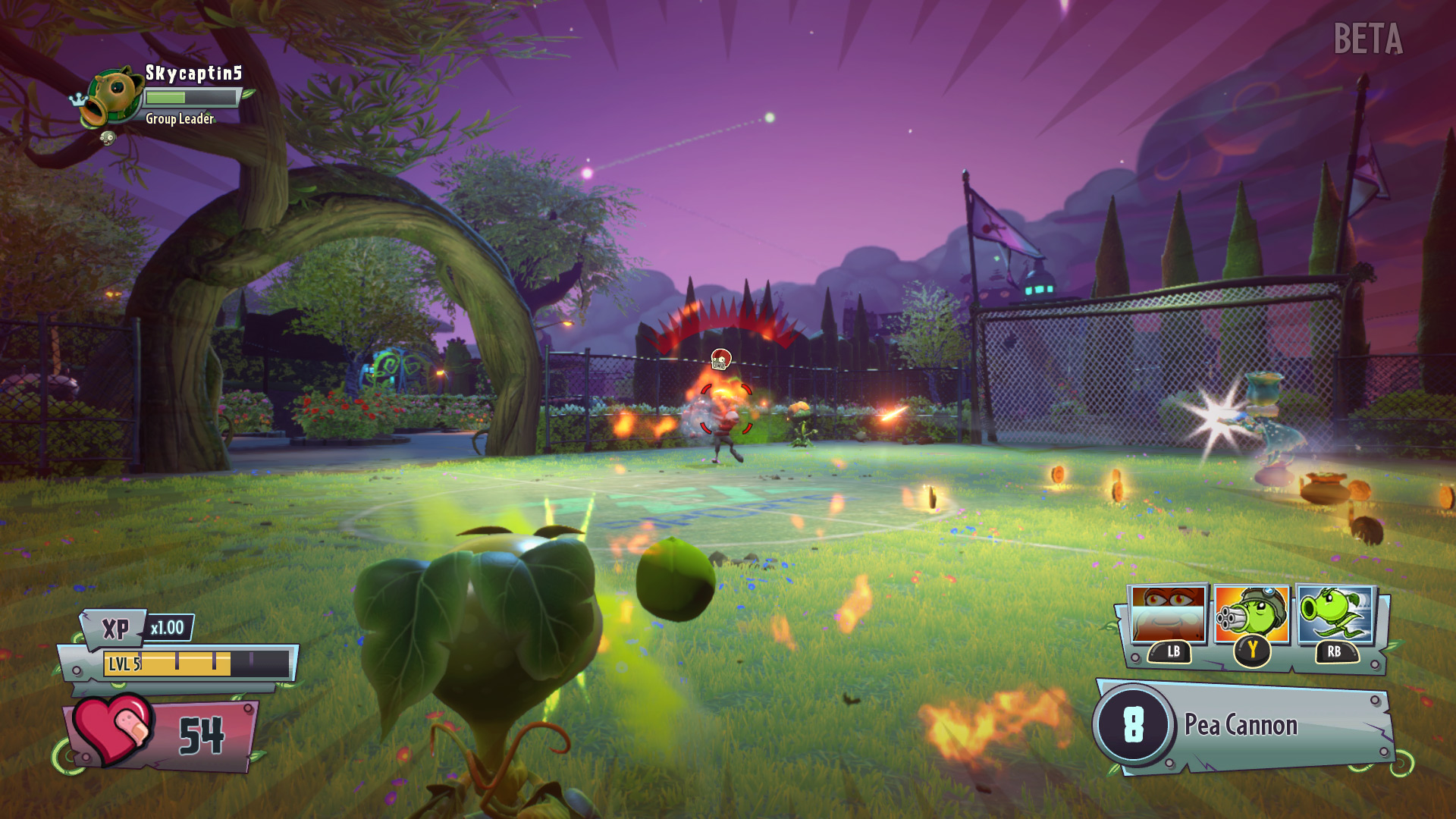 The modes will rotate during the beta day though at the moment I only had access to a couple of the modes present. The two modes present when I played for my impressions were Turf Takeover and Team Vanquish. The first is actually a combination of mode cycling with Herbal Assault and Gardens & Graveyards. What's really different this time is that the plants actually play on the assault as well this time with a series of weeds and zombies can actually defend. It's an interesting and welcomed change up from the first title. The game looks very much the same to the last game with many of the models just being carried over though they've doubled the cast of classes present within the game which creates a far bigger variety. The maps also have the same look as before, though they've been greatly expanded in terms of the details and seem more focused than before. The mixture of those two aspects actually creates a much more hectic and crazy experience with it actually being too busy at times. It gets to the point of insanity where it's hard to get kill streaks going as well. It's not impossible, but certain bonuses are gained within each match as you level up though definitely a less forgiving game. Things are still a lot of fun and it can be great once you adjust to the mix of crazy action, but still even at that point it feels too busy at times. 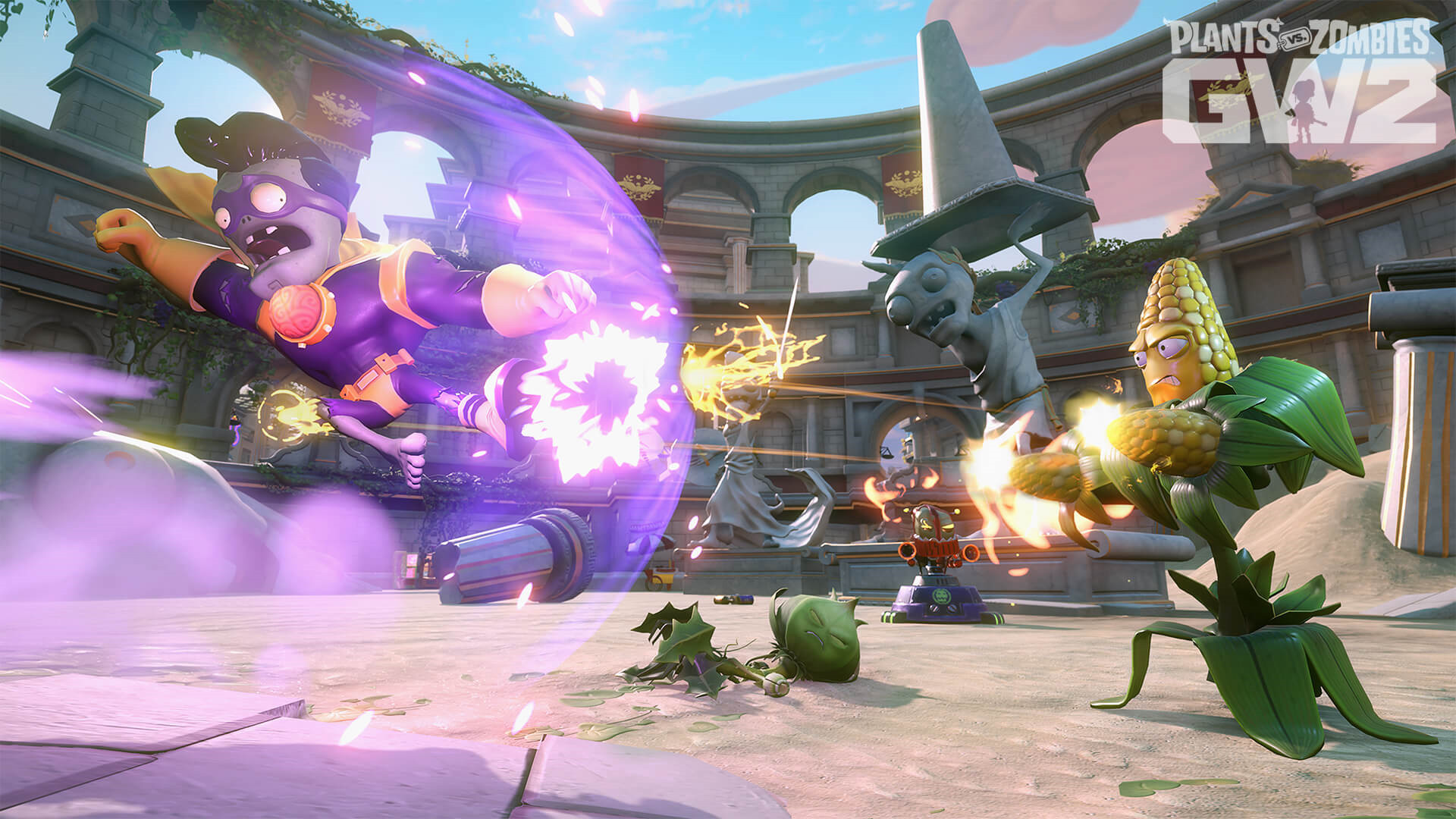 While playing I was able to check out all of the characters and really play on two maps quite often. The first is a really awesome almost amusement park land which has varying sections or lands as they would call them. There were spots like the dinoland or even a desert like Egyptian area. The second map I played many plays on was a zombie space station on the moon which went through many open areas with low gravity and some interesting interior spaces. I didn't particularly care too much for the moon map, but the first map had so many great looking areas filled with some funny mentions. The new roster has a great selection of characters added into it doubling the cast. My favorite additions were the rose character which had a mystical wand and Kernel Korn which had some sick shoot abilities. The crab character was also neat for the plants, though slightly cheap as it could shoot while behind a shield. When it comes to the zombies I found the old Pirate like character to be neat and somewhat enjoyed playing as the hero. Other than that I found the rest of the new characters to be neat, but really not anything that I cared for too much. Considering the existing roster and my previous experience with the old cast I'll probably be quite picky with all the choices. So far I've had a great time with the beta and really look forward to playing the full game.

Impressions Made on Plants vs Zombies: Garden Warfare 2 Beta