It's only been a short time since the rebirth of Star Wars Battlefront was launched and we're already receiving a free DLC map for the game. The level "Graveyard of Giants" takes place on the planet Jakku during the Battle of Jakku moment which the level has been dubbed. This takes place shortly after the key battle at Endor during the original trilogy so things for the Empire must be shaky after that event. The new map also displays the new game type called "Turning Point" which has the Rebel forces rushing Empire positions placed across the map in order to progress forward towards the next set of positions. It plays in a similar fashion to Rush from Battlefield if anyone is familiar with that game type and just spreads out to multiple areas. Aside from that I wanted to write this impressions for all aspects of this update since I was lucky enough to gain early access and play matches within this upcoming DLC level. Additionally for those that want a video aspect instead of reading anything I have that below with a full match and commentary discussing my thoughts. For those that want to read about the level and my impressions feel free to scroll ahead! 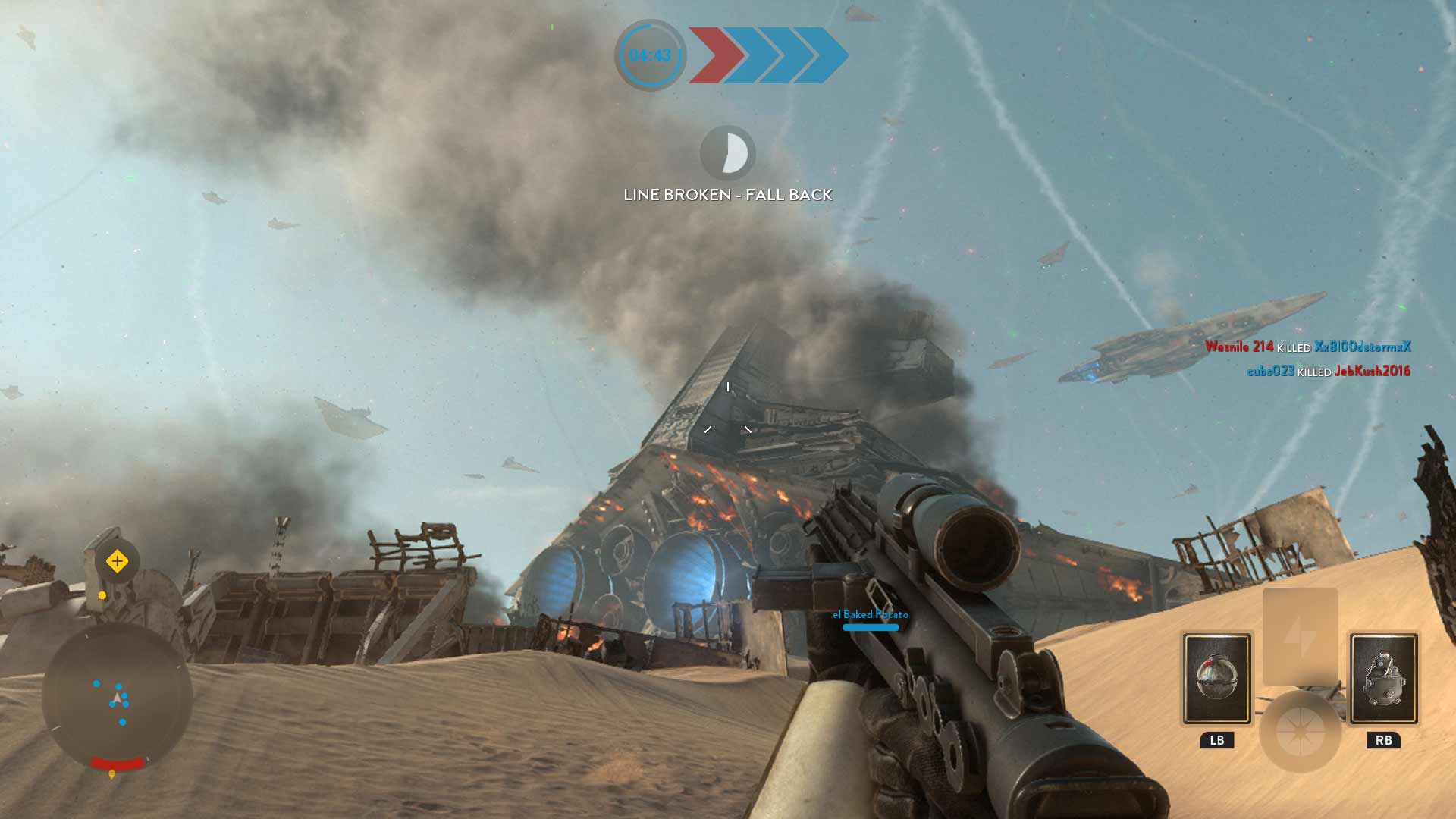 As you know this DLC level will be coming to everyone for free and acts as a progression to making the game a much larger experience. That was of course one of the main problems with the core game when it released and it's nice to see DICE working to remedy that by providing some free additional content. The level itself takes its place along some of the largest arenas of battle I've played in games across a massive sprawling desert. That also comes with a bit of a negative to some degree as there are many open areas that will need to be crossed when working on objectives and you're free game for whomever has cover on the other side. This works both ways, but after all the matches I played I still felt there should have been more cover across the battlefield. There's of course cover found on the level as it's not one big wasteland, but I thought I should mention the dangerous open spots. The cover actually present is beautiful and presented through massive crashed ships, smaller ships like Tie Fighters or the broken carcasses of poor AT-ATs that fell in combat. It was so awesome to just run through the remains of an AT-AT or through the body while taking shelter from air strikes. This is hopefully visible enough in the screenshots I posted within this article as they were all taken during the matches to give an infanitry viewing of the battlefield. 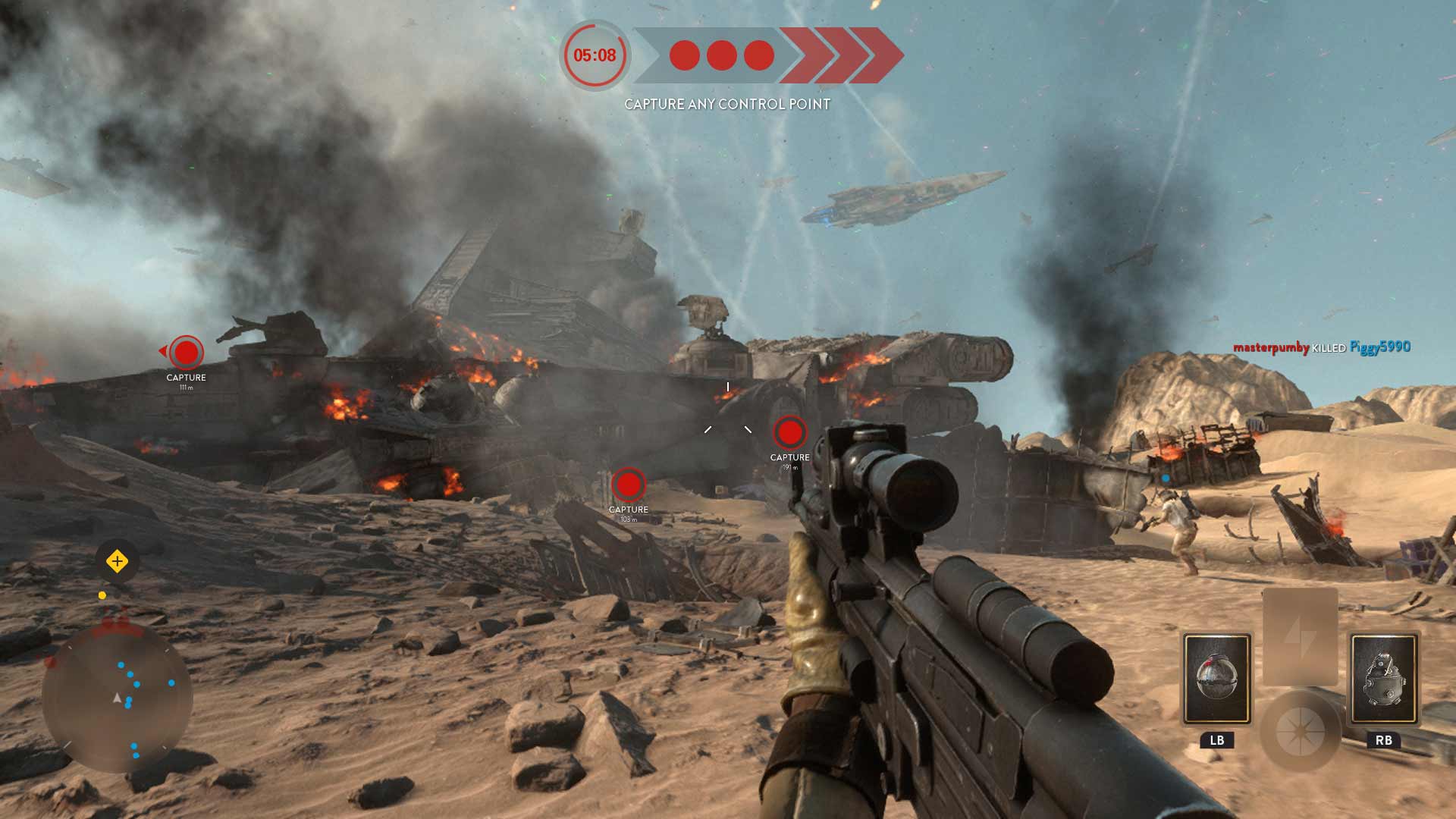 With this map being one of the largest maps there's going to be a large field of battle to cover and it's amazing that they were able to litter the place with destruction and still make each of the zones you move across feel unique. What's also crazy is just appreciating the map itself whether that is the crashed Star Destroyer in the backdrop, crashing ships in the distance or up at the sky to the many jet streaks and combat going on within the air. It makes the whole scene feel so hectic without taking away from the current battle waging on the planet. Going back to the map I did enjoy the creative use of cover along with the shapes of the sand dunes to sort of guide players along. It was strange at times moving through the pieces of cover since some areas didn't line up with shots or getting stuck on some objects though that was rare enough.

Another big part of this DLC is the new mode which I briefly went over earlier called "Turning Point". The goal of this game is to push the Empire back by capturing a selection of positions across the map. As you can see in the screenshots the level is broken into four sections with each having a number of positions to capture. These spots also vary from arrow point to point with some having three positions with some having two or just one. There's also a time limit to be found as well that was timed perfectly with the flow of gameplay. It keeps Rebels pushing towards the objectives so they're not taking their time and it gives the Empire a good chance to swiftly win against the opposing forces. Time gets added through the capturing the positions and works accordingly where one match came down to the final seconds. This time was when my team thought we had a solid amount of the time to take the final position and at the end just didn't push enough to get it done. 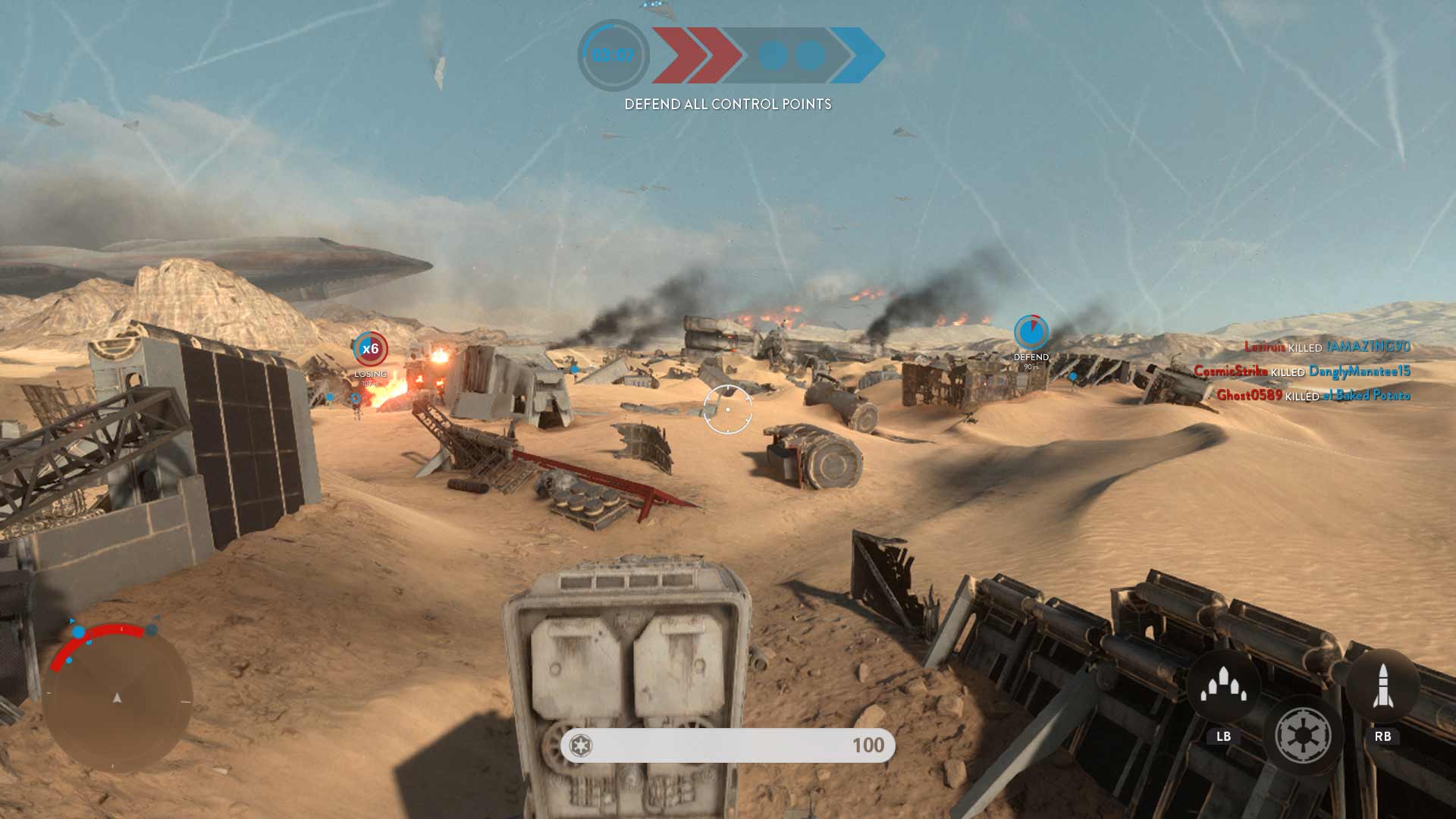 I'll probably be playing more matches to the launch of this pack and even after when it arrives within the rotation. While it's not as great as the legendary Endor on the game in my opinion, I did find it to be one of the strongest maps within the game itself. This really makes me excited for what the actual season pass will bring as the map was a great example of everything going right. With that comment I don't want people comparing content of the season pass to the main game, I felt there should have been more at the base too but this is just how it's going to go. The battle of Jakku was certainly a great experience and I'm sure everyone will love having this within the rotation while also finding the new game mode to be a nice extra addition to the roster as well. Feel free to check out the gameplay below or let me know if you have any questions about what I played as well!