I honestly had no idea of what Paladins was until I got a random press release about the game heading into closed beta. Thought it would be interesting to check out since Hi-Rez Studios has made some great games with Smite being one I quite enjoyed playing. With Paladins I was able to check out the game during closed beta so of course this impressions is based on what I've been able to play. The official beta sign-up along with the entire Paladins home site itself can be found at the bottom. Paladins will also be releasing on PC, Xbox One and PS4 in 2016 with possible additional early builds releasing as well. That all aside, I can now dive into my actual impressions for Paladins. The game is presented as a first person shooter which pits two teams of five against each other while they battle over random control points that appear across the map. Once captured these spots will spawn a siege weapon that automatically heads towards the enemy stronghold. The team that spawned the siege weapon will need to defend it while it takes down the three tiers of gates to win the game while the other team will need to defend and destroy that siege weapon. Once the device is destroyed things will somewhat reset as players battle for the next control point and the battles wages on in this tug of war style. 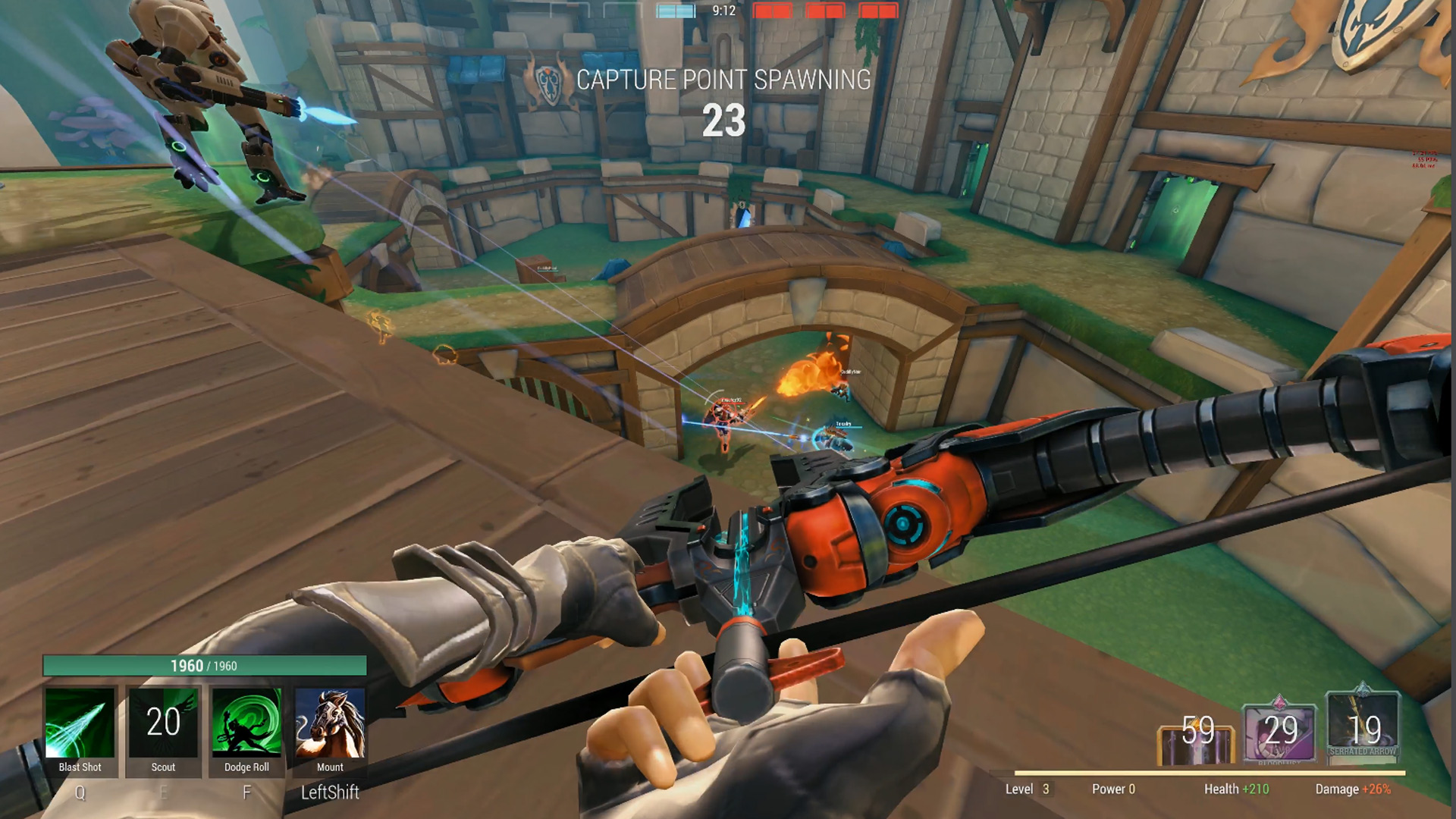 From what I played the gameplay was largely balanced though there always seemed to be a point where one team knew it was over for them. The game features a neat team chat in the form of their characters have a large array of chat phrases where people would say "good game" when they felt it was going to end. I did however witness a huge comeback with our team one round which was crazy so anything can really happen. In regards to characters I felt some more balancing was needed with the fire night possessing too many abilities and the range characters like the one I played as being almost too weak. I get that there will be some weaknesses considering some players are support, but there needs to be a better chance present for those weaker ones to escape or be able to seek help from teammates. For such a team based game I felt the elements of getting people to work together were well done and that was present across all the matches I played which is important in these type of games. The matchmaking system was also really well done and very quick despite it being a closed beta of sorts so I was impressed by the speeds of finding players. When loading in it can be quite the frenzy to pick characters so be wary of that if you plan on playing in the future. There seems to be a great roster of characters as well already and I can only assume that this list will grow over time. 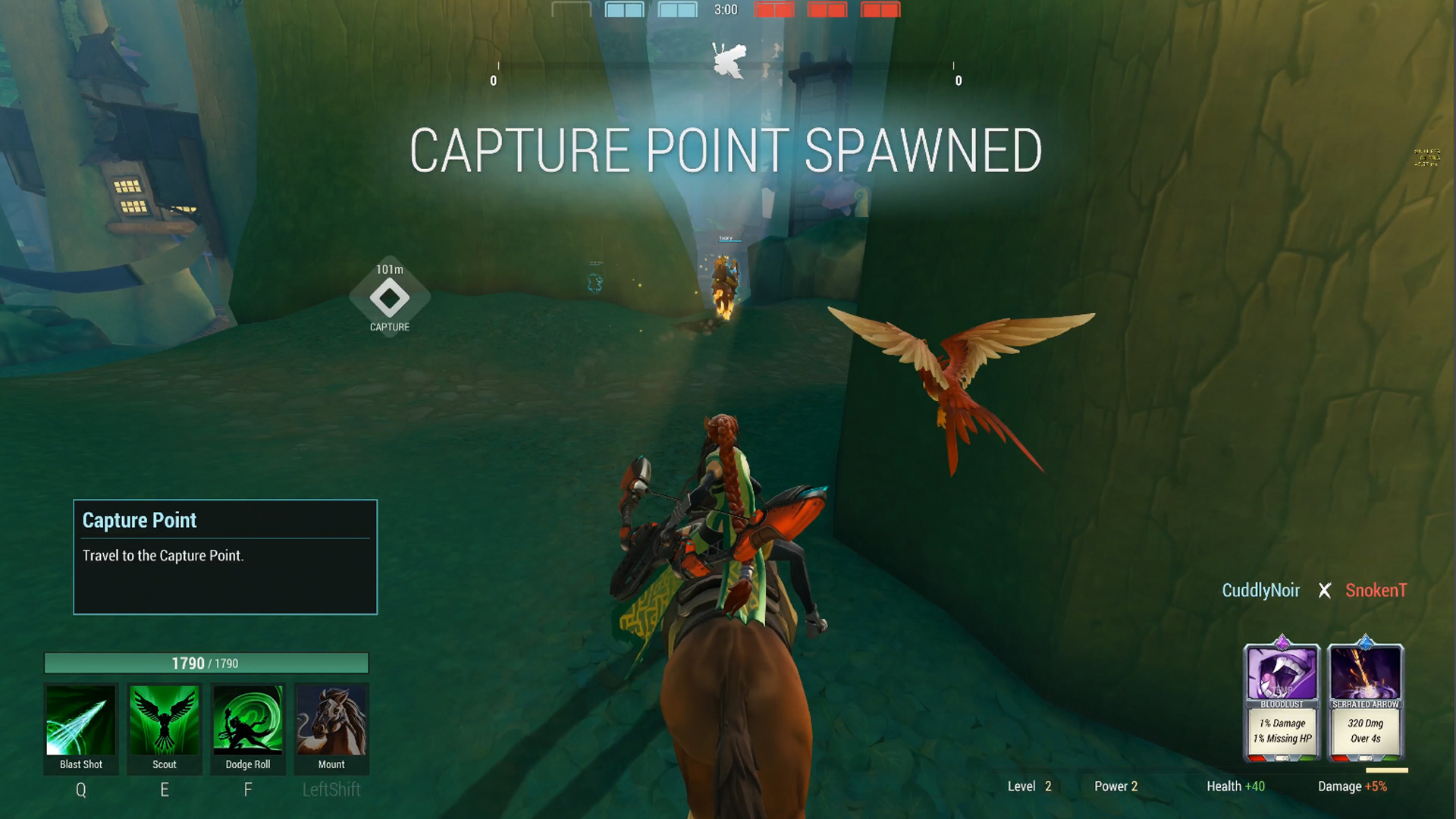 The flow of game is well done and matches are perfectly paced with matches usually around 10-15 minutes. This time frame is actually a preference of mine for matches and doesn't drag on the action longer than needed. Paladins also features a neat card game built into the experience where you can gain them with chest unlocks and use them during games. Right at the start you get a selection of one card out of three which will be binded to your character across the match. You can additional cards when you level in-game that grant more abilities and these are helpful to beef up your abilities across the match. This integration works well within the game and since everyone loves trading cards in video games these days it'll work well. In matches every character also has a set of regular abilities aside from their main weapon which matches their backstory. I chose to play as Cassie during my time which carries a bow and is more of a support class. Her abilities including a stronger bow shot; sending her bird out, a roll away ability and a mount. These vary across the characters and are just an example to give context to the abilities.

While I don't want to dive too far into the game considering it's just the beta at this moment, I can definitely say I had a ton of fun with the time I spent with Paladins so far. Thought I would also go over the graphics that need some more focus as they are rather bland. They did a great job in the creation and art style for the various characters present yet the actual environments are ugly. Not to say they won't change, but they just look awful even at the maximum settings in 4k resolution. The maps are well designed in terms of strategies and the setup of the maps present was great. It's just the art designs that left much to be desired. With that I say that it's a really fun game to be playing even during the closed beta and look forward to covering it as it evolves over time. Personally can't wait to check it out on consoles and it's already something to look forward to in the following year.

Impressions Made on PC during Closed Beta
Paladins Home Page