All Guns on Deck Impressions

All Guns on Deck is a ship management game where you control a crew of sea ready men in order to battle a series of Sci-Fi enemies that fly up above. Aside from their assortment of ships that soar by up above, you'll also have to deal with a number of paratroopers assaulting on the deck. This is done by flicking them which creates a cloud of blood dust, which was actually entertaining. I actually sort have started to enjoy games of this design since it's neat to control a vessel and its various aspects. Just wish in regards to this one that the AI was more competent in fighting back against the enemy as they hardly hit any targets by themselves and it's hard to constantly manage both ends. That and the fact the game gives no easy play, even at the start which can really turn people away. I was expecting to sink into the game with some victories, yet I kept getting crushed at the start, only beating a couple waves before having my ship destroyed. It was frustrating to say the least, though the game still presents some interesting concepts if developed properly going further. I'll have to note that this is an early access title on Steam so it will definitely be having changes over time. 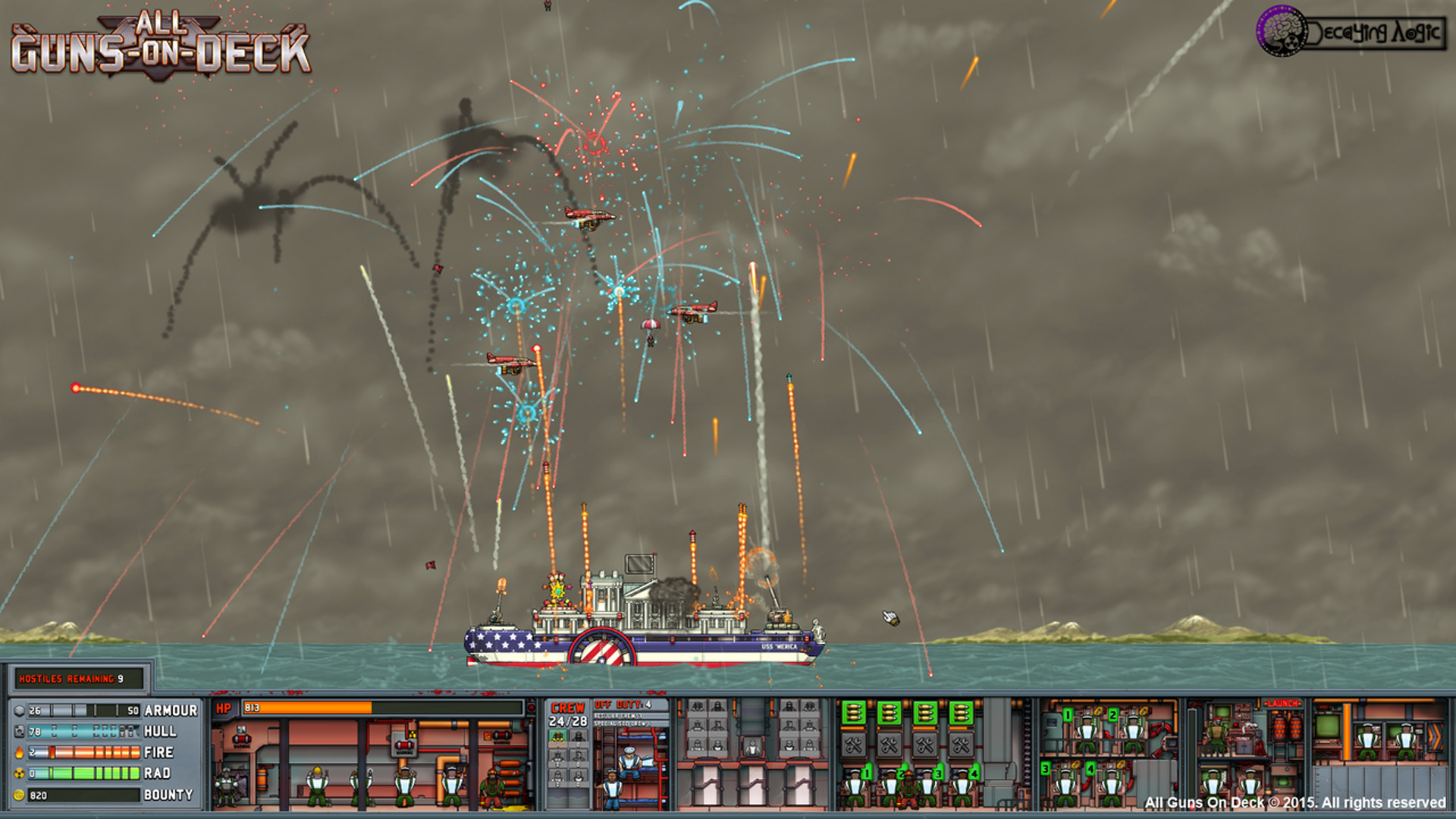 I'm going to shift things over and discuss some of the interesting aspects I found in the game. First off was the artwork which had some sort of olden colorful scheme to it which was great to look at. There's a bunch of smaller things that go on across the screen from explosions to waves during a loading screen that were nice additions. I also loved the concept of controlling your crew and transforming their role on the ship to meet what crisis was happening. Going from a regular sailor one moment to a fire fighter the next was great. I do wish they had a tad more intelligence to them since it was difficult controlling all aspects at once, they need to have the ability at base to perform. Another really great thing the game has going for it is the customization of your ship. There are some many options present to make your ship feel personal and completely unique. Thought sadly it's somewhat grindy in order to collect these resources, though the end presentation can be really neat looking. You can customize the guns; colors, bonus abilities amongst the list of things through metal cards that fit into slots on the ship. From there you send out your ship to battle while moving the sailors around and taking manual control of the guns often.

In-between battling across the ocean you also have a bit of a hub station to collect sailors and supplies. This area needs a huge remodel since I at first had no idea what I was doing or where I was headed. Your character can also not handle any long distance requests from the mouse click and will walk diagonally into a wall and get stuck or walk an opposite direction. That was annoying since I shouldn't need to hold his hand (guide directly) from a medical bay to the ship station. This is my first look at All Guns on Deck during the early access on Steam and after it all I did enjoy many aspects despite the complaints. It's an early access title so they will be working on things towards an eventual launch, you can check out their Steam page below. I'll also mention that the price itself isn't all that bad considering the depth currently available and possible in the future.