As soon as I saw that Lego Worlds was announced this morning I immediately went to Steam and spent my fairly long time saved points from selling cards in order to pick this up. Its been billed as a Minecraft match or their answer to Minecraft which this title really isn't at all. It's strange that so much fuss was made of that aspect which this game really doesn't care the same style. Sure you're given this open world that's procedural building as you explore with unlimited craft, but Minecraft as more focus. There really isn't any story here in terms of actually having a goal. You can't build recipes or craft things like Minecraft and there's nothing to really goal towards. Well, at least at this point in the development since it's an early access title on steam (you can find the download link below). At this time your only purpose is to run about collecting the various minifigures, animals or buildings that fill the landscape. These are collected by walking by them, riding them or destroying them. It'll play the satisfying sounds you're familiar with since this is a Traveller's Tales game so it's a very well known space. I'm also very surprised with this release since they should have their hands full with the upcoming LEGO games including Jurassic World, Avengers 2 and Dimensions. Personally I'll be picking up all of those and it will cost a mint over Dimensions lifespan so I'm really puzzled and yet welcoming to this title.

I mean, just look how happy my semi-customized (seriously they need to work on more options) character riding a polar bear across the landscapes. The scenery is beautiful in this game with a very fluid style of play. I was pleasantly surprised at how great characters moved and animations were. Shadows and other graphic touches are also present as they move quickly through the time of day though the sound properties were really annoying in how often they occurred. I did come across some skeletons which were easy to deal with as they should be so I'm wondering how many enemy types are actually out there and I was even treated with their treasure which was an extra default building piece. I'll get to crafting in the next block, but I just want to say graphical this game is impressive. Even more so I love the procedural generation of the places which will do wonders for world variety. Saying that, we definitely need cooperative play added to this as it would be so much fun with more friends. 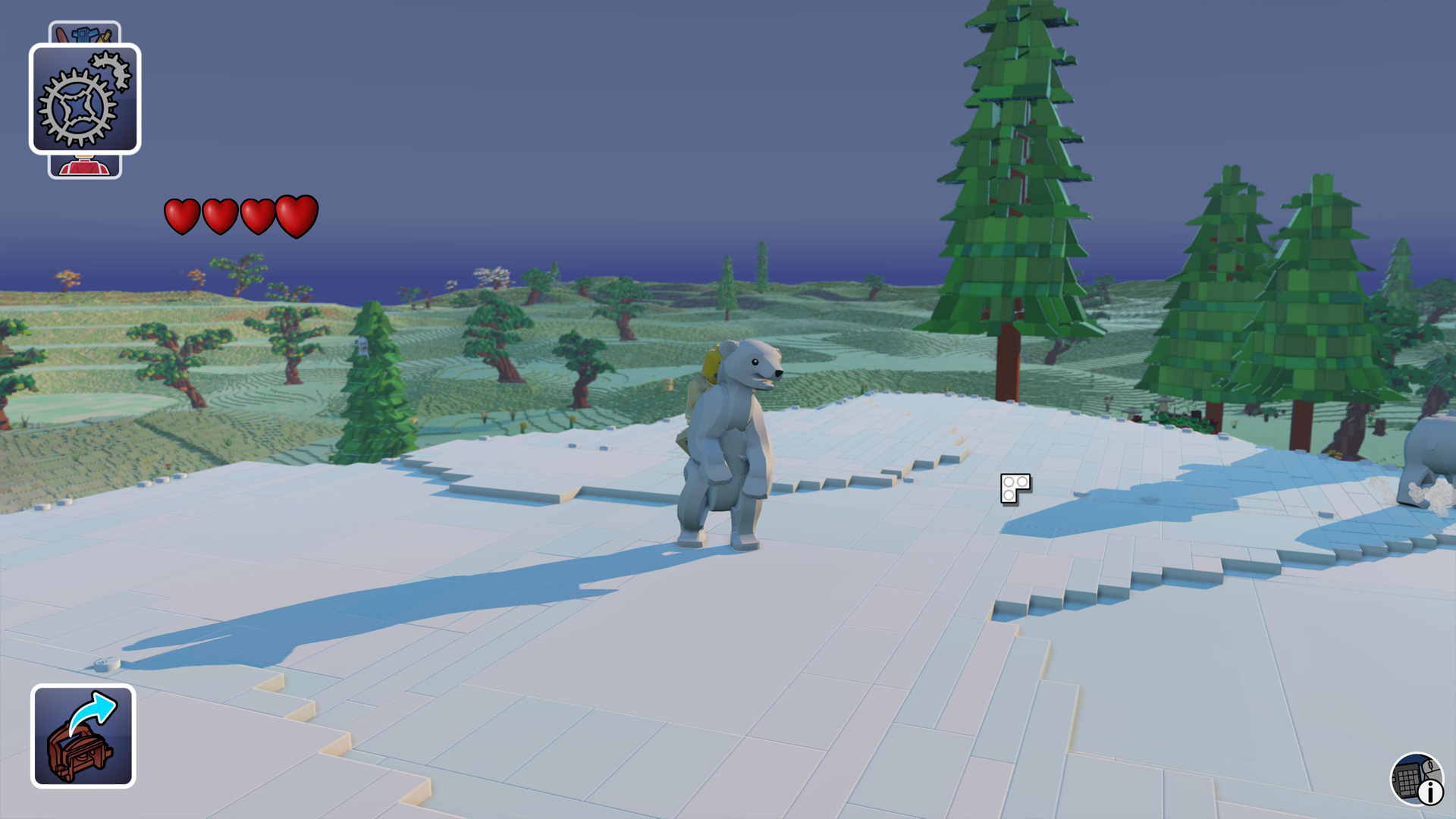 Moving onto crafting which is obviously the core of any LEGO game I did enjoy it. It was well designed where you could build brick by brick with tons of options or even pre-built sets. More will be discovered over time I'm sure, though I was just building a small street and you character creates it with some special shooter pack thing. That's the magic of LEGO, is the building process at least for me. I would like however that more care be spent with customizing building interiors so that it can be more personalized. There's also a bunch of settings for terrain and how you manipulate blocks so the most patient will build amazing structures. Should be very interesting to see how building further develops while it's on early access.

At this point I would say the game is at decent pace in development and definitely play-able. I wonder what the overall goal is with this project as it sort of just showed up out of the blue without any marketing and it doesn't have any sort of in-game goal for players. It's more of just a sandbox for individuals to create things and explore about. I could see some buildings towns or wild creations, but I don't quite think it's the same as Minecraft. For future updates on LEGO Worlds and other LEGO properties, feel free to drop by the site later on as I'm very interested in how this game changes on early access. Finally, feel free to check out my first ten minutes with the game below as I'm first learning how to build and interact with the world.