The first map pack for Advanced Warfare has arrived bringing us four new multiplayer maps to add some more havoc to the experience. The first map heading the pack is Core which takes place in the Gobi desert around a destroyed nuclear reactor. Things are rough and there are cracked contamination zones everywhere in this fairly decent lane map. The second map is Urban which is an awful rectangle type map that feels like a small box area. Death is in abundance as the spanning is not well done and it really isn't a great addition. The third map in this pack is Sideshow which is a clown controlled motel park. The level is actually bigger than I thought and another average level that has weird colored explosion balls that show up in the match. Drift is the final map and actually the best map in this selection bringing us to the Rockies for some snow combat. It's festive time and the area is great though the avalanche which is supposed to be a big feature really doesn't do much. Overall they're some extra maps with a strong selection out of them and some more average other ones.

Zombies returns with Outbreak, Advanced Warfare's version of the zombie formula that we are well aware of. Of course some things have changed, though it does really feel like a more classic experience that hasn't been present for a long time. Everything has been stripped down to basics for this version and the mode feels very simplistic. The mystic side of zombies has also been replaced with more generic properties like 3D Printers and regular power-ups. The Exo also replaces the power in classic zombies and gives you a huge mobility change. Perks have become exo abilities as well and finally the pack-a-punch is now a twenty level upgrade system. The map also feels very simplistic and has narrow structures mixed with more open areas. It certainly doesn't do anything special or new with zombies, but it does capture a traditional feel that I enjoy. Another minor annoyance was the whole infection thing requiring you to hit up a clean up zone or electric zombies which take out your exo abilities. Overall the cast was actually fantastic with this zombies pack and Malkovich knocked it out of the park with his role in particular.

Havoc is our first look into the season pass for Advanced Warfare and so far it's looking rather dim like the last release. The four multiplayer maps aren't particularly strong with only one map being decent out of the pack. The zombies is also welcomed and follows a traditional path with a great cast, though it doesn't feel special. They just don't seem to do anything new in this pack and it's just a couple of extra maps. Was really hoping zombies would start this off with a huge note. Follow here for the future DLC packs and their reviews. 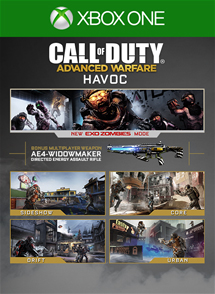 Call of Duty: Advanced Warfare Review on Xbox One