Virtual Reality is in full swing this year at E3 and in particular was being heavily pushed by Playstation. This was present not only in their section of the show floor, but also during their after Playstation E3 2016 conference after party. It was great for them to invite me as I'm new to covering Playstation this year and the later bit of the last. With that I got to try two of the Playstation VR pushed titles in what was an awesome chill out area, they had a Doughnut wall!! I've never seen a wall of Doughnuts before so I was impressed then, but even more so with the headset. This whole week of E3 2016 was quite tiresome as I tried on basically every headset out there at some point in the booking and thought I'd give the PSVR a separate article as it's sure to be a hot upcoming item. While everyone is doing VR is some way or another Playstation is doing their own version and is building up an impressive list of titles for it. At the event I was able to check out the ever colorful SuperHyperCube and the virtual tank simulator BattleZone. A final mention for this first area is that these pictures are both of me checking the headset out during the Playstation E3 experience while playing SuperHyperCube. 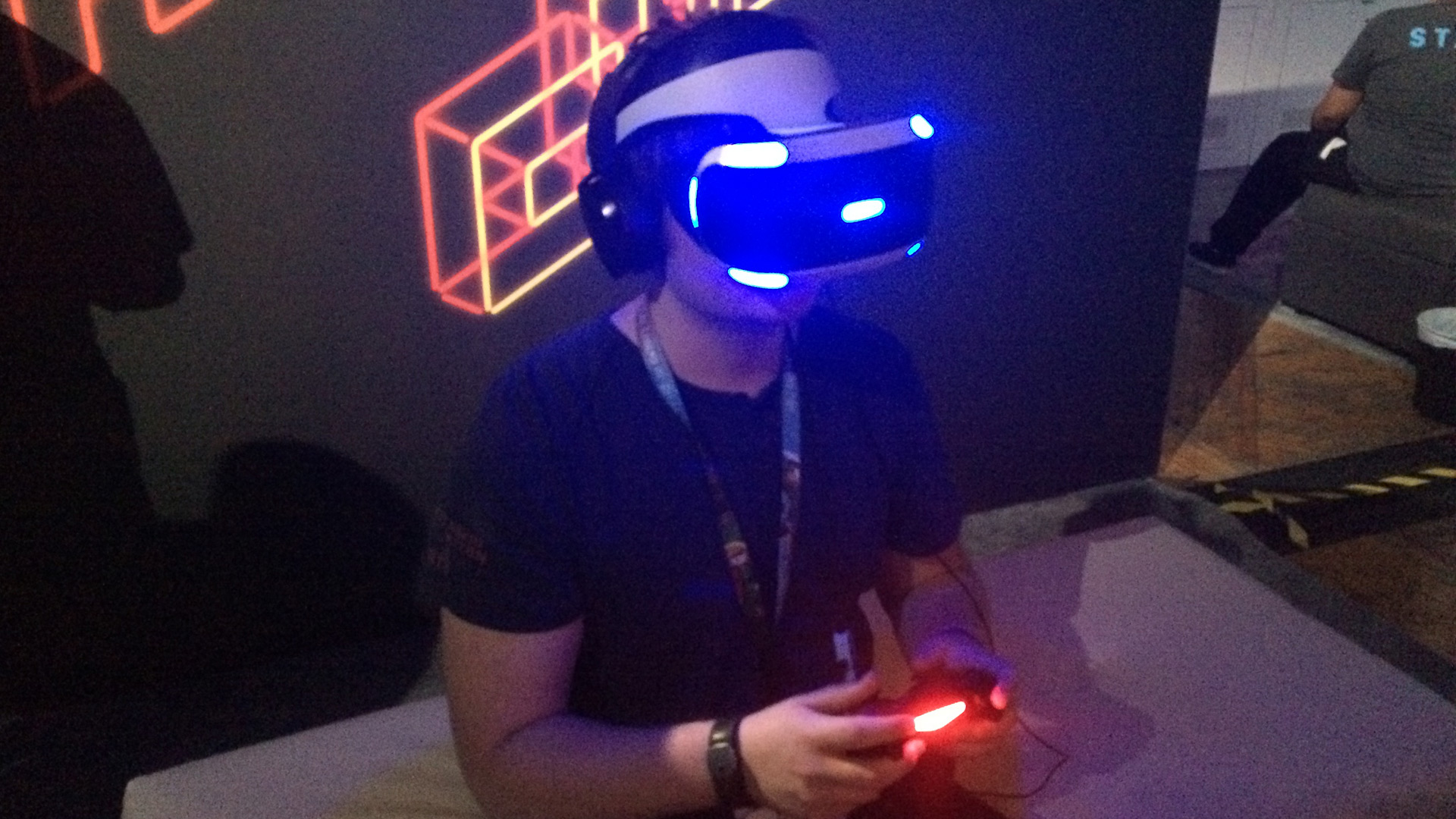 I felt that these two titles represented a good variation for what's to come at launch and they were both fun. First off the headset is quite comfy with nice foam and is easy to place on my head. Adjustments are also simple with a couple strap tweak options and the standard VR optimizer where it just focuses the screen. The PSVR worked perfectly fine once on and it also looked good, at about parity with the Rift or Vive headsets. Then again I haven't really seen the full potential in any of these headsets in what I'd call tech demo type games so I'm just giving a baseline with what I've played. It works well and definitely looks much better than the mobile or lower end VR headsets as those show every damn pixel. I would liked a bit more disconnect as looking down I could still easily see the floor or my phone, but it was decent enough in that regard. I'm also always worried about feeling sick when wearing VR due to a couple bad experiences and through both of these demos I was fine with no issues after even having been drinking (many adult gamers will relate that this is an important test).

The first game I played was SuperHyperCube which is bright, colorful and an easy going puzzle game. The key is to hit objects into the whole while the world zooms by, it was a good use of VR headset and intriguing once I got the hang of it. This was more stationary as I'm just looking forward, though not every game is going to have me running around. The next title was much more active being Rebellion's BattleZone where you drive in a virtual tank shooting colorful tanks that looked like they're from Tron. It worked well and I was moving around within this virtual tank pit and shooting folks. It was all smooth when looking around and very responsive when I was reacting with the world. I also quite liked this one enjoying shooters and it's a good example of a move movement focused game. With that I was pleased with what I played and it'll be interesting to see how this much more affordable headset fairs. Personally I'm not sold yet as I'll need to see the launch line-up, at this point it's a bit more bang for my buck to get a PC enabled device for more potential coverage. For regular gamers this is absolutely the best of high end without the crazy price and I see there's potential for this to really take off on Playstation. 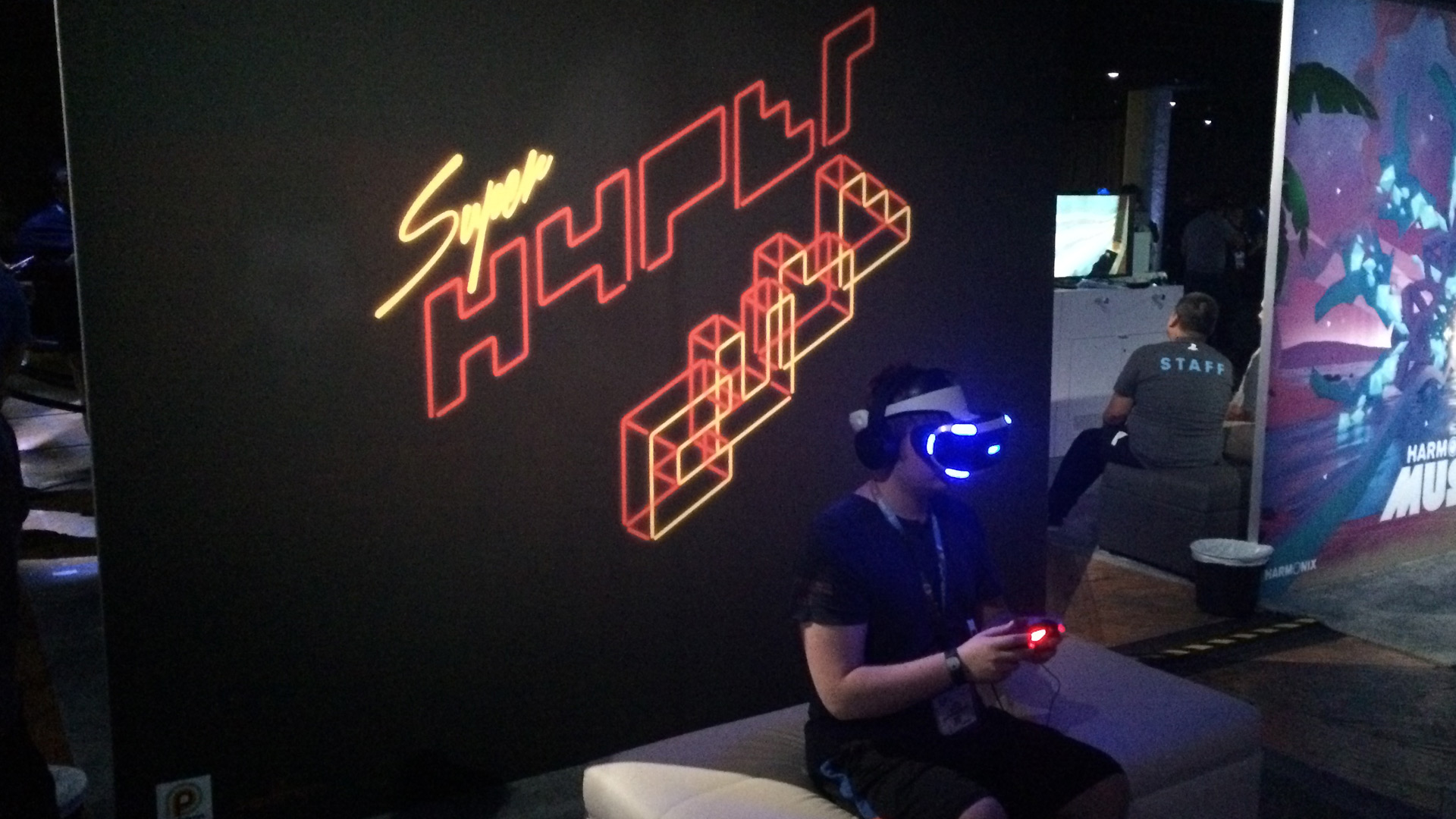