The Solus Project has you playing as a lone astronaut lost on a hostile planet which is almost basically out to kill you. All of your crew has perished and you have no knowledge of how Earth is doing since you were sent out from the distraught home world to explore. Within the demo we awake on this open world island and I was essentially sent out to do whatever. I had two runs of the demo provided at the E3 Xbox Booth, one where I rushed through the land to finish what objectives were available and another where I walked about the island. I'll start off discussing the first aspect and move onto the other playthrough after. With this first play I was discovering a new world for the first time, this demo was of course set up to show off exactly what sort of spectacles the planet has to display. I saw both a hostile windy rain storm and also an intense meteor storm as well which shook the entire world. I was also given information about the atmosphere and how deadly this planet will be. Despite being a game focused on exploration without enemies you're apparently set to die a ton. At least that's what I was told and didn't really face since this is was a demo to show off the game and dying isn't so much fun at the show. You also immediately notice that this game has a bit of a RPG aspect to it as you collect supplies across the landscape which will benefit you as there's a survival system built into the back as well. This is tracked on a fancy little gadget you carry about which monitors vitals and other aspects of your character. We went over the machine briefly and you can check out the image lower for a good capture of it. It mainly looks at your calories; sleep, water in-take and sleep though I'll have to spend more time with it later in order to properly talk about exactly how in-depth it gets. 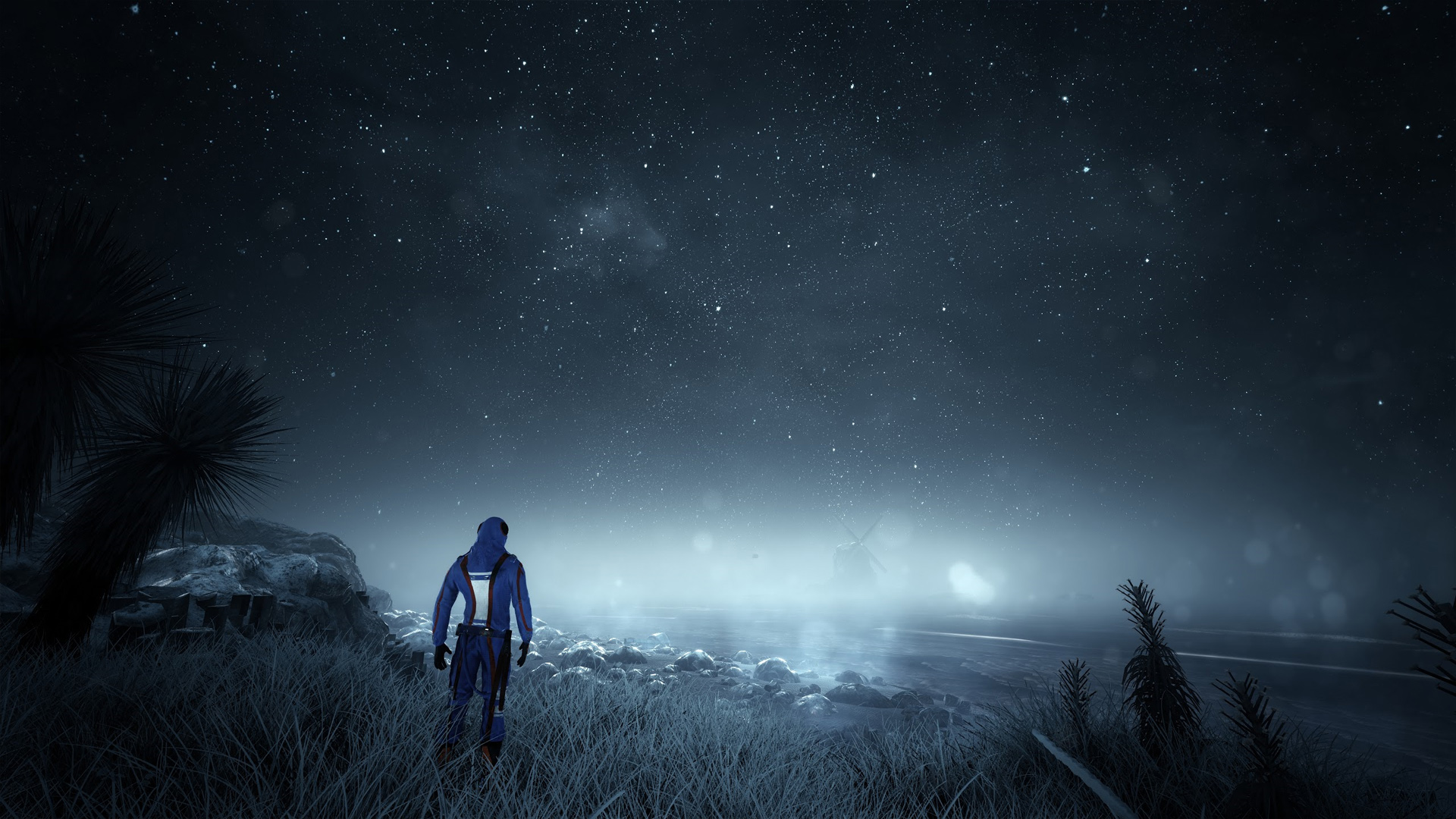 After getting a quick explanation about the machine and its functions I was then set for towards a waypoint marker. It actually took a fair amount of time to sprint over towards it as they wanted to get that feeling of scale across. Walking across this open field I could see changes in the planets that were strewn across the skyline and then it began to get darker. This is where those meteors began spraying down so I sprinted quicker. I came across another dead astronaut that was basically just a skeleton chilling out and then I found some ancient door that blocked my way. Obviously I needed a key so I continued walking around until I found one, from that point things were getting dark with rain falling down. My character was getting cold and wet, which is semi-hazardous to your health. Once inside I faced another simple puzzle where I pulled a sword from some skeleton and stuck it in a hole to unlock the final door, then the demo was over. I should also mention I found a flashlight off my astronaut comrade which helped me see in the dark cave so I'm going to guess items like that may come up often for assistance. 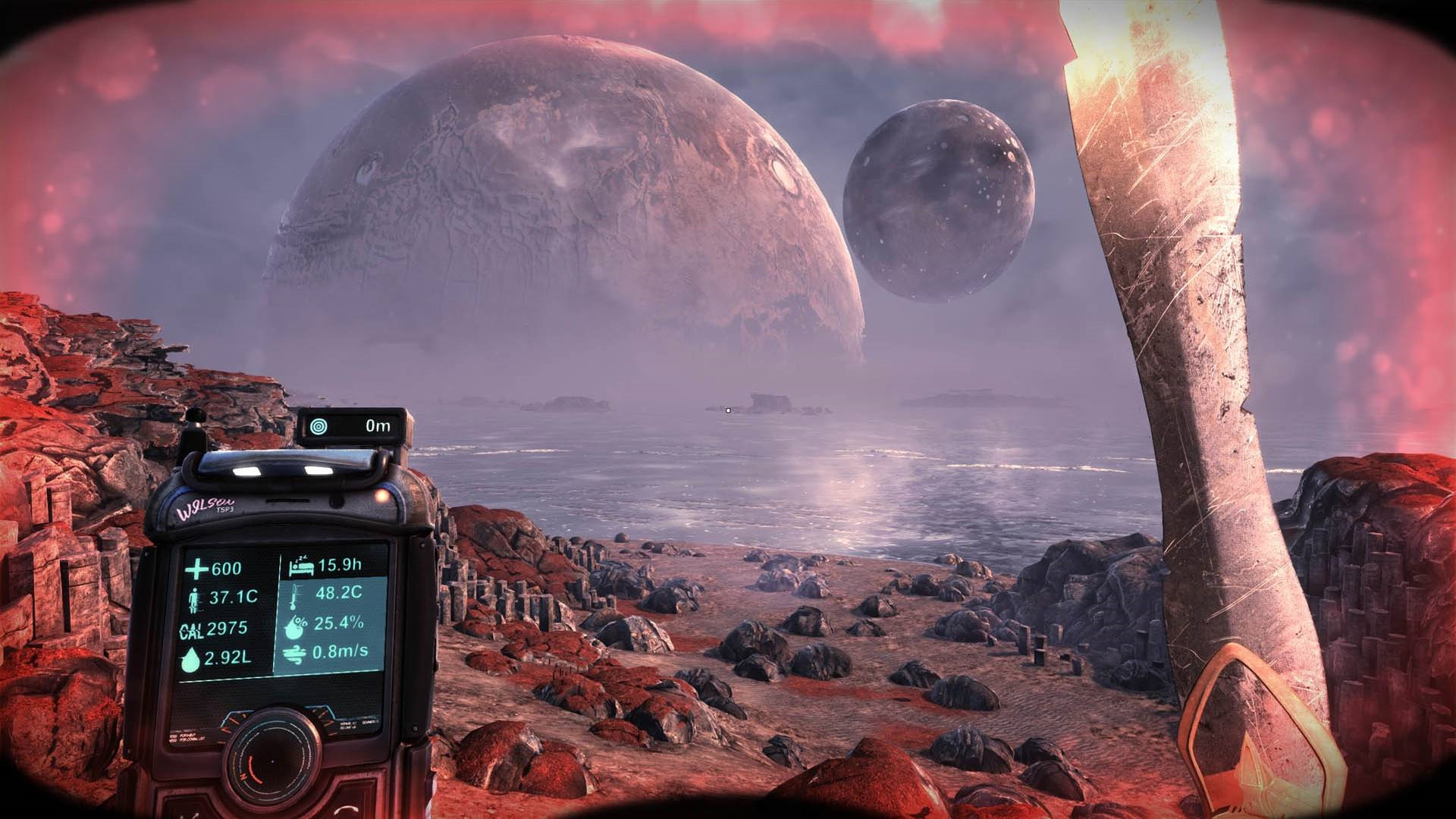 This was of course just a demo to get points across though I was wondering how complex it might get or how the narrative may go as it really didn't show me anything. With my next playthrough I was told to view the scale of the world, so I sprinted around the island. This actually took a fair bit of time to do as the place was massive, you can also swim which I did at various points. I also got the comment that I'm one of those folks that like to break demos or go off the plan as I was skipping across passive pillars, though I did come across a secret collectible so I imagine I did something right. I honestly can't make too many comments on what exactly I saw, this being in terms of the demo not really showing much. I grabbed some items like water, a flashlight and some tools for objectives though it all seemed very simplistic. This led me asking about the main narrative versus survival and I was told that this game is focused on a certain linear story though that survival aspect is alive in the background. I'm quite interested to see where this all goes and hope that there's more to it then what I saw. While the world was wondrous and neat, explorative games need to have a bit more to them or they're just walking simulators. Finally, I should mention that they're looking into Windows 10 cross-buy for the game and that they expect first quarter of 2016 for release. Follow the site for further details as I'm sure they'll show up before then and an eventual review of the title.