So I was finally able to go to my local comic expo this year in Calgary and had some various photos taken with cosplay. Thought I would type out my journey throughout the day. It was a ton of fun though honestly dragged on a bit as we were waiting for the final photo op with Emily Kinney that plays Beth from the Walking Dead which kept us there for a long period of time.

I also took part in a photo op with the lovely Felicia Day and also the nice cosplay girls with one taking the time to rub my imported sweater. It was a great time and here are a handful of my favorite picks and such. If you are located in any of these and wish it to be taken done or swapped out hit up the email button at the bottom of the page. All about respecting that privacy and such. 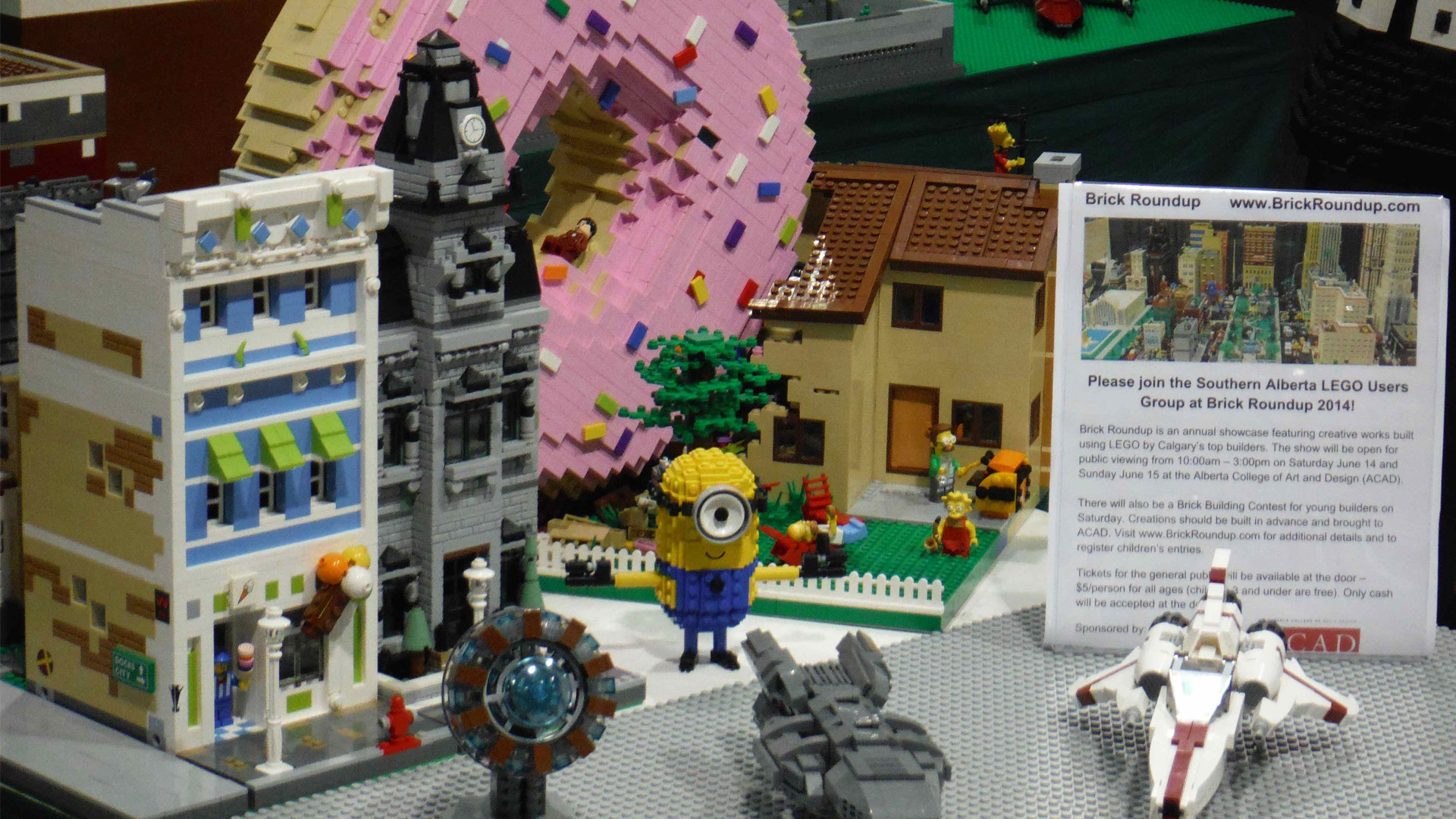 The first area I was able to check out during the Comic-Con was the LEGO area which was awesome and filled with sooo many differing heroes, along with references. It was a great display and reading the picture you can check out their site. Don't worry, cosplay is down further below.

Azog is it, I searched it up online. 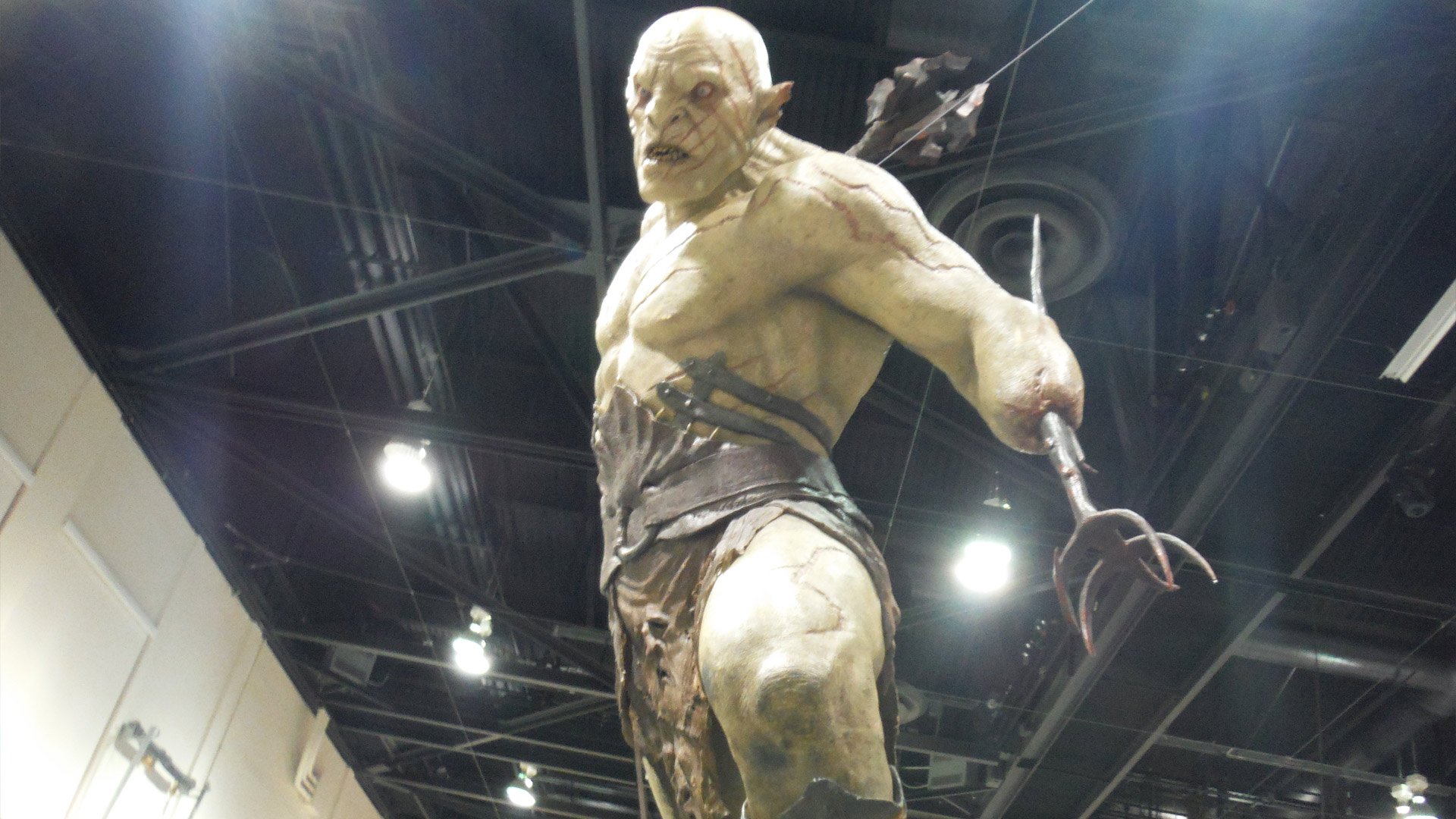 I believe that this is the Azog the main orc enemy of the Hobbit grouping. How scary he is all up above looming over all the walking patrons. It's quite the setup with a neat set of LOTR memorabilia sitting around from swords to other interesting sculptures.

The Gears of War 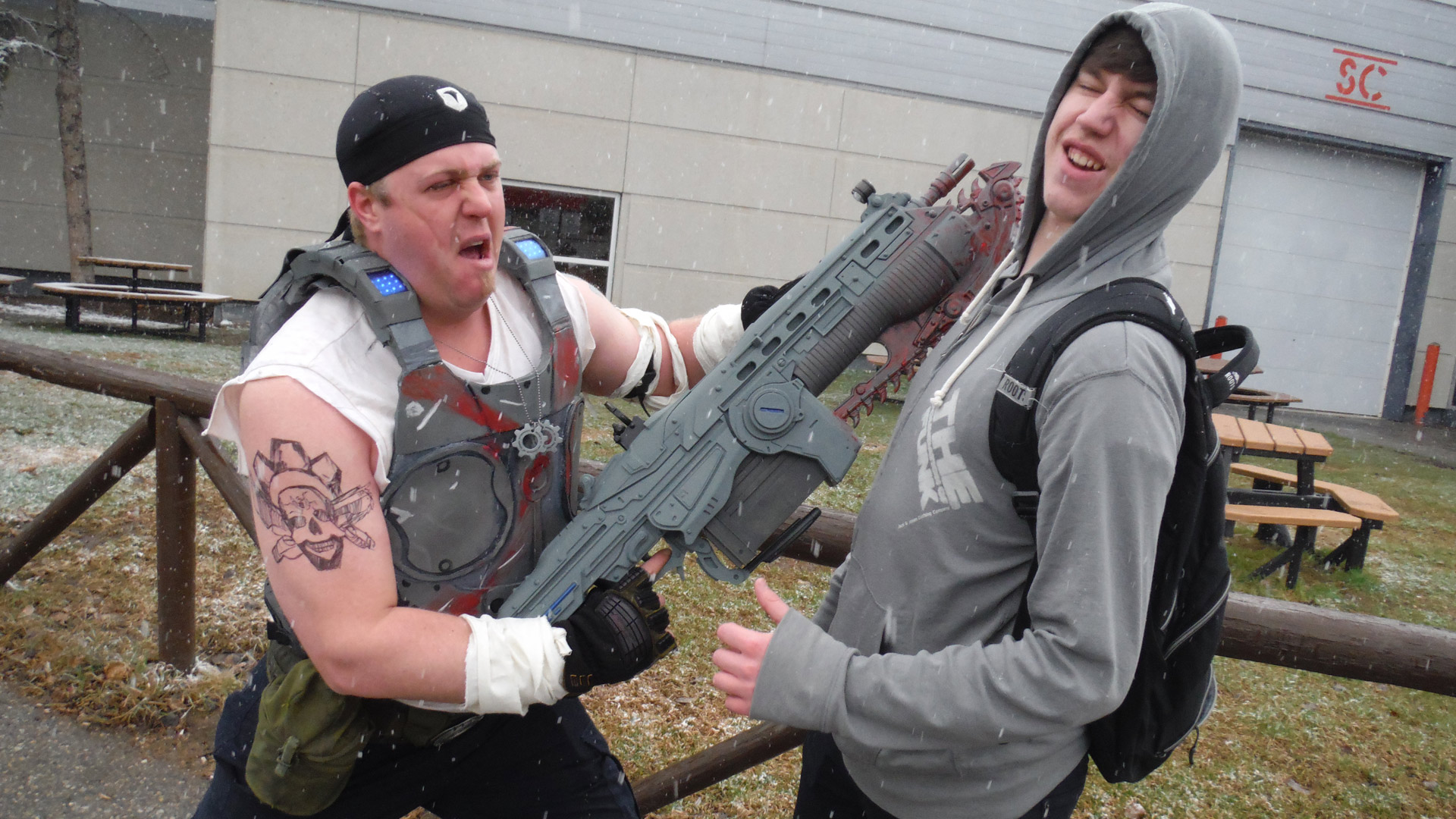 Marcus Fenix was the first picture we actually took upon even arriving at the event, despite my wowed face from holding the lancer I chose to go with my friend getting chainsawed. It was a killed Kenny kind of day as you will see, fret not as I am adding the blood effects for him after. It was pretty badass to have this to start off the day, it was quite something and a great was to start the cosplay photo array. 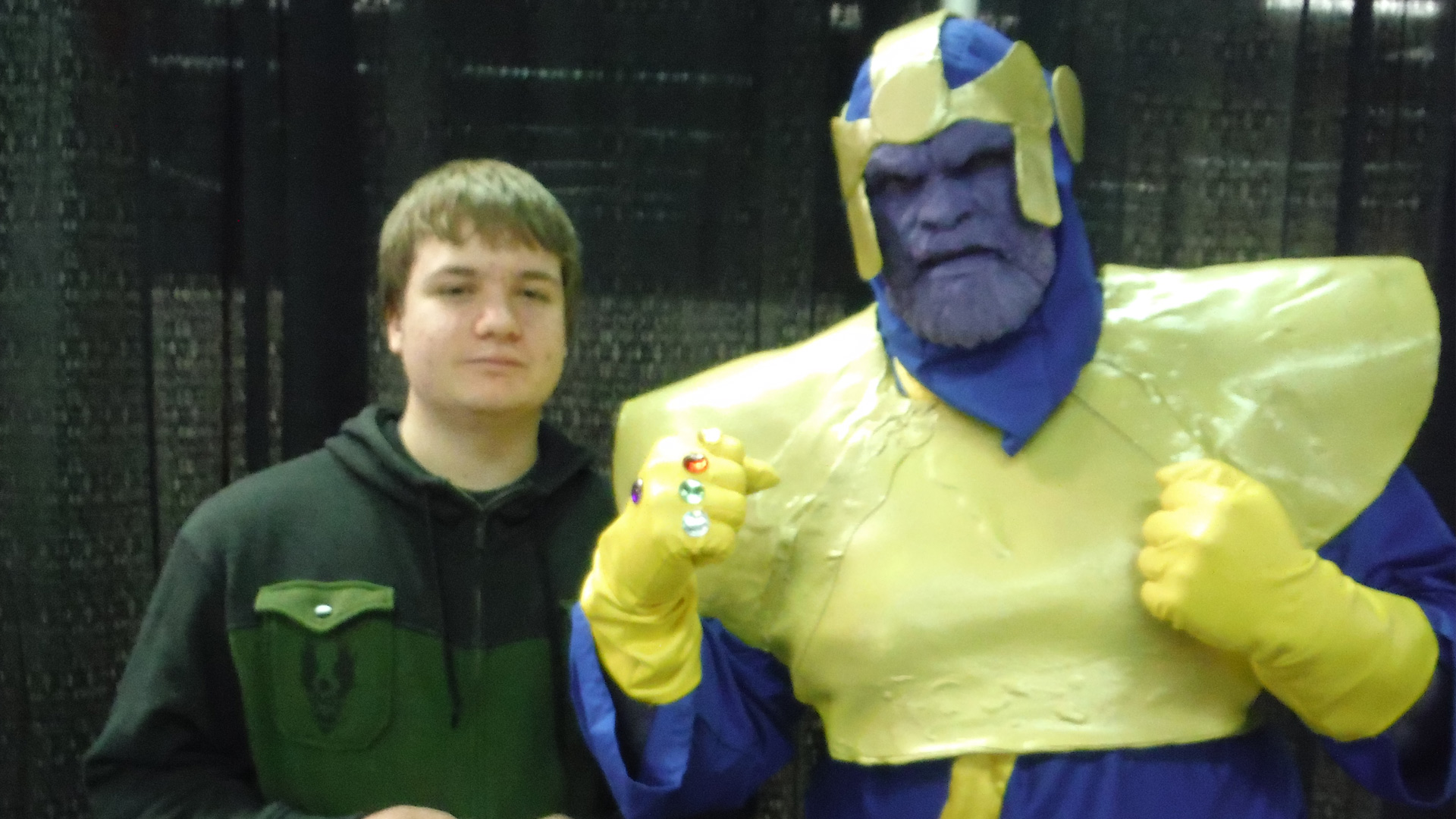 I went with this particular photo despite me being somewhat mundane, it properly shows off the infinity gauntlet and this really amazing cosplay. It honestly might have been the best one of the show and was definitely dead on. Was quite friendly and ready to help, also he punched out Kenny to keep the spirit alive. 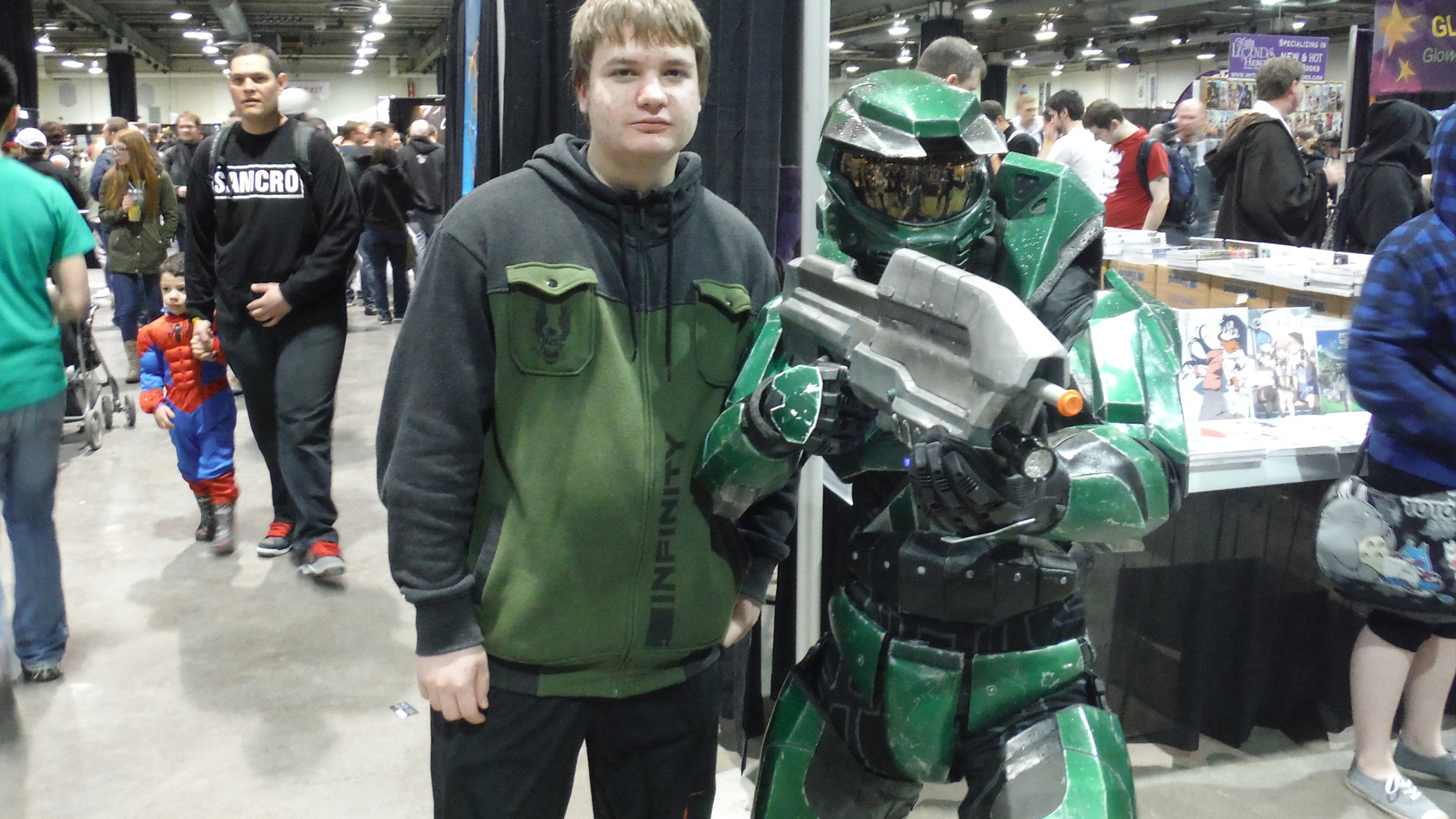 Upon wondering I was really hoping I would come across a Chief at some point. To be even more honest I was really hoping for a Cortana to be sadly disappointed. Aside from that note this was awesome, really dead on for the Chief from Combat Evolved. If edited I could have probably made a cover from this armor, it looks too realistic. 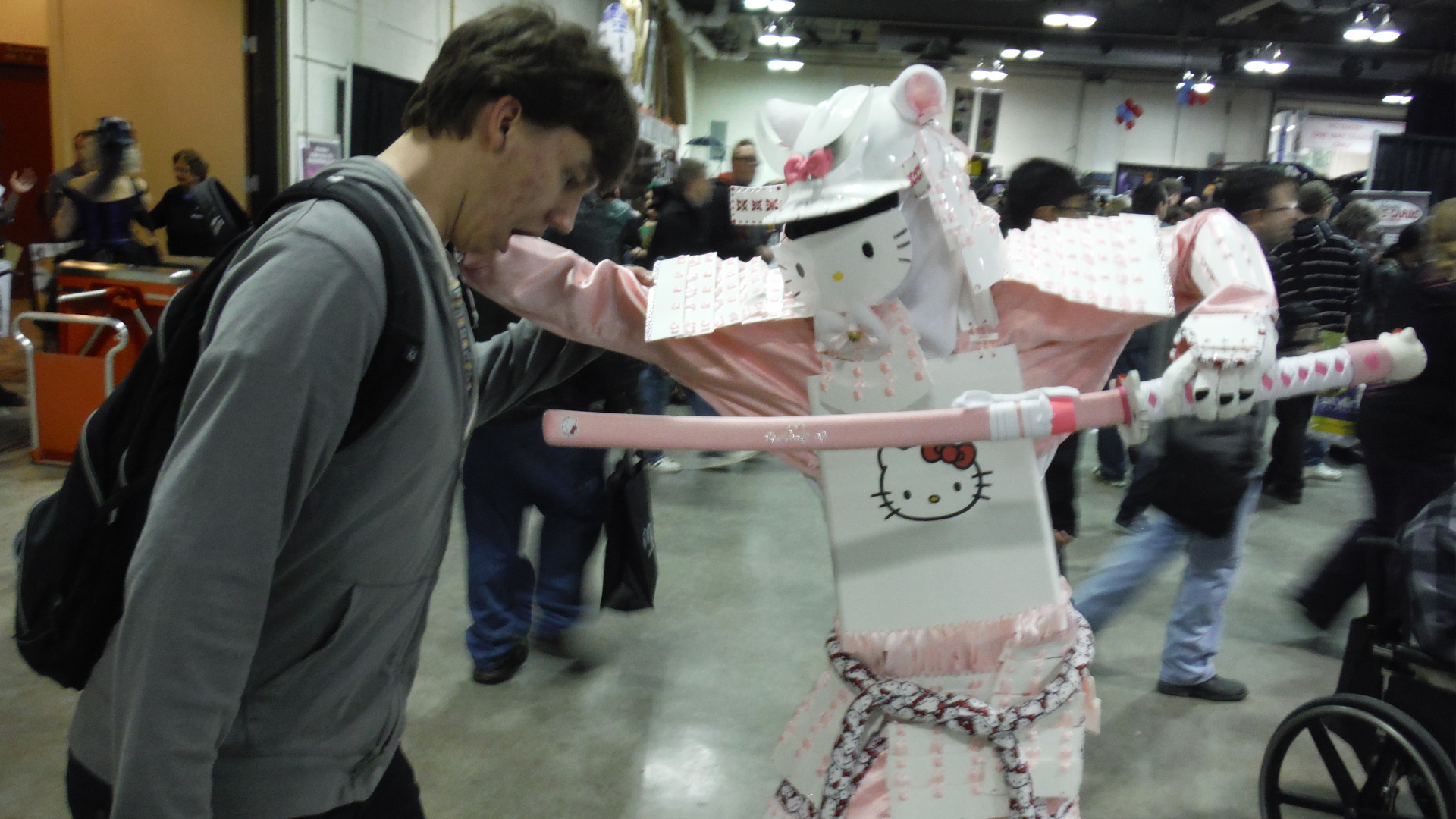 Hello Kitty has apparently blessed this samurai as he once again kills Kenny for us with his pink death tipped blade. A very creative design and really something I thought I would never even fathom in my life. Yet really, here it is. 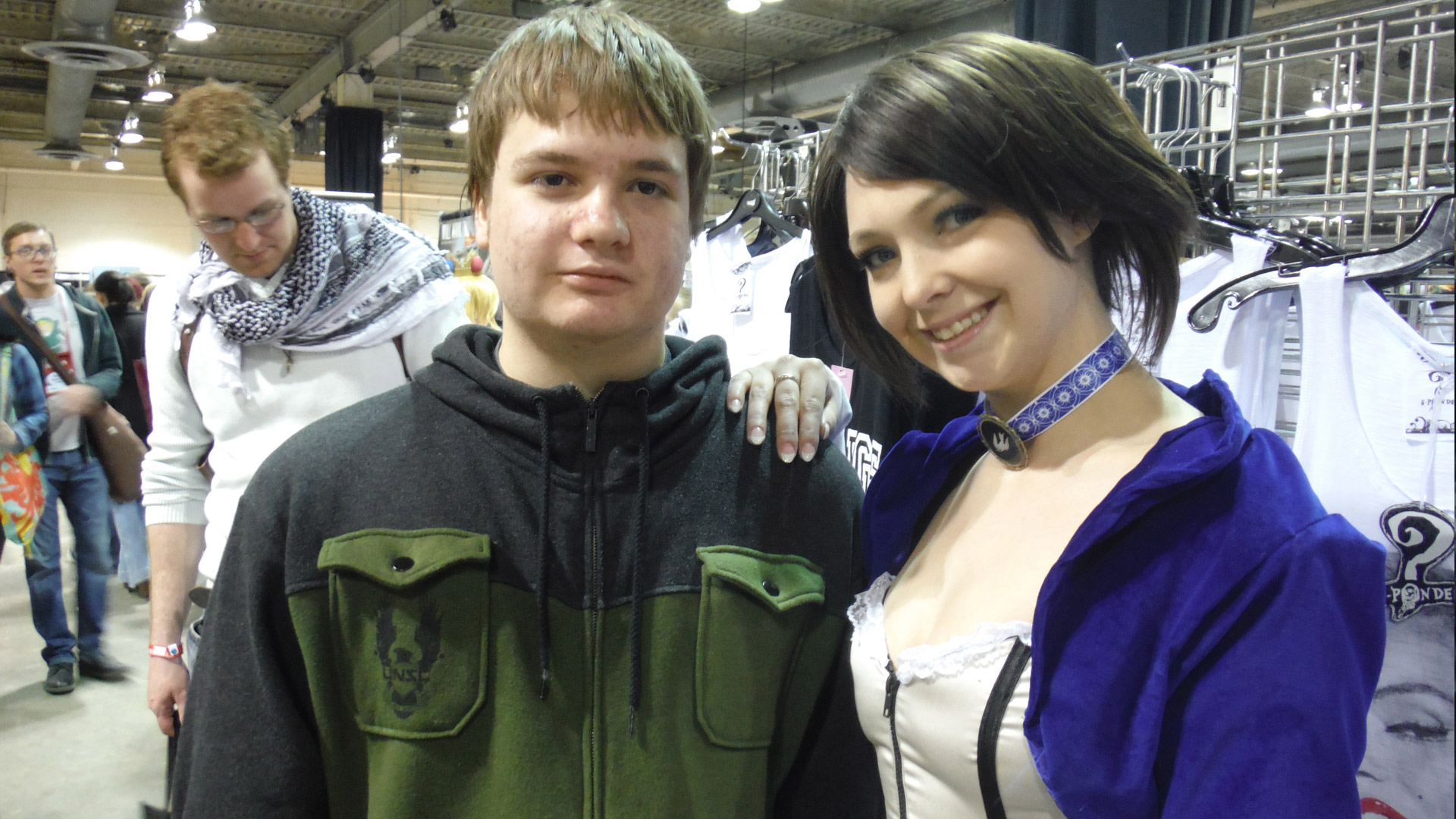 I was happily on the search today for Elizabeth cosplays of all sorts as I really liked her character in Bioshock Infinite. Can't say I was hoping to also see some of the noire style from Burial at Sea, but two Elizabeth's were good enough for me. I'm just going to go ahead and put these one after another. Really well done and capture Elizabeth perfectly.

Me with Elizabeth! Again, Paradox! 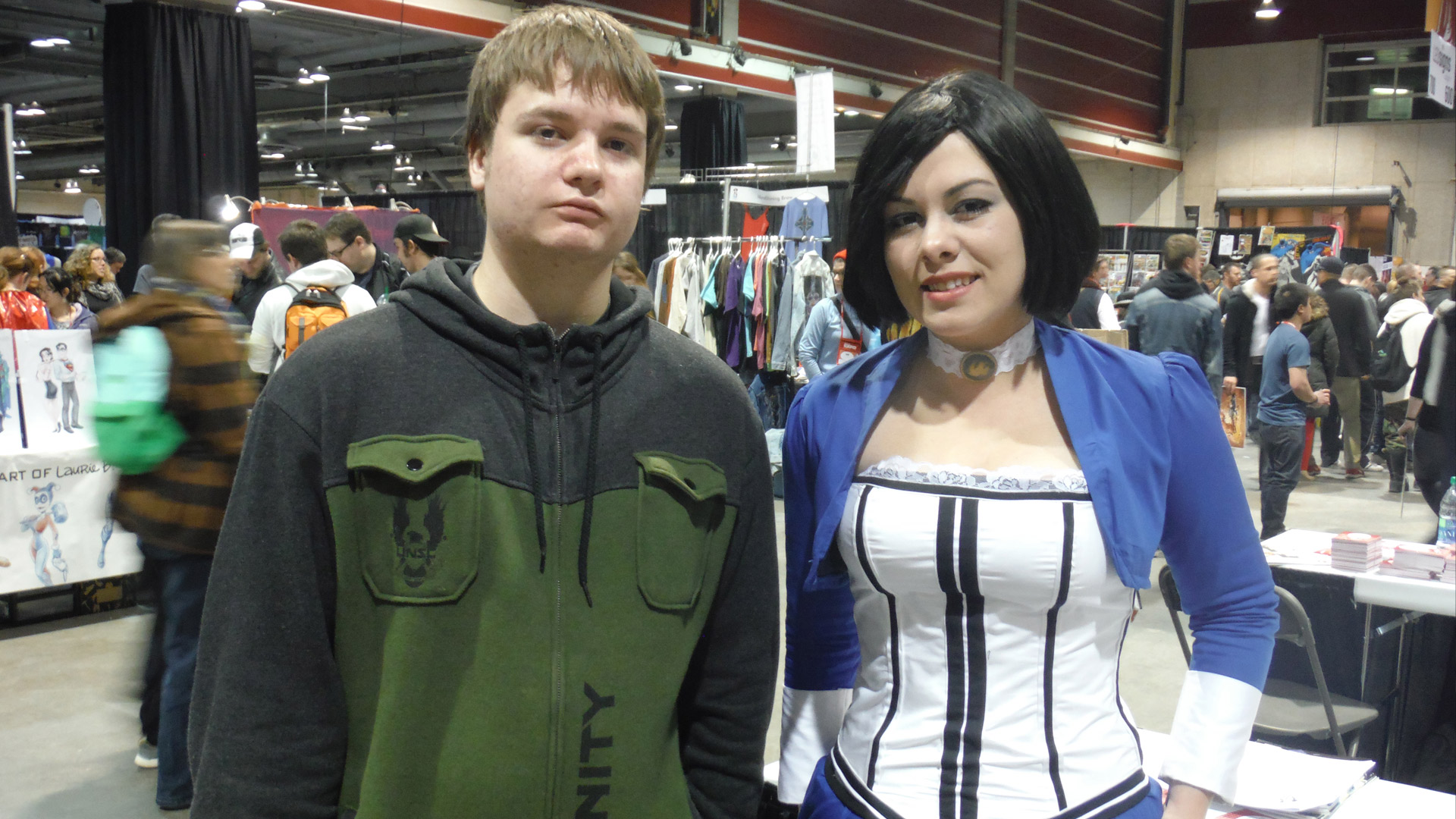 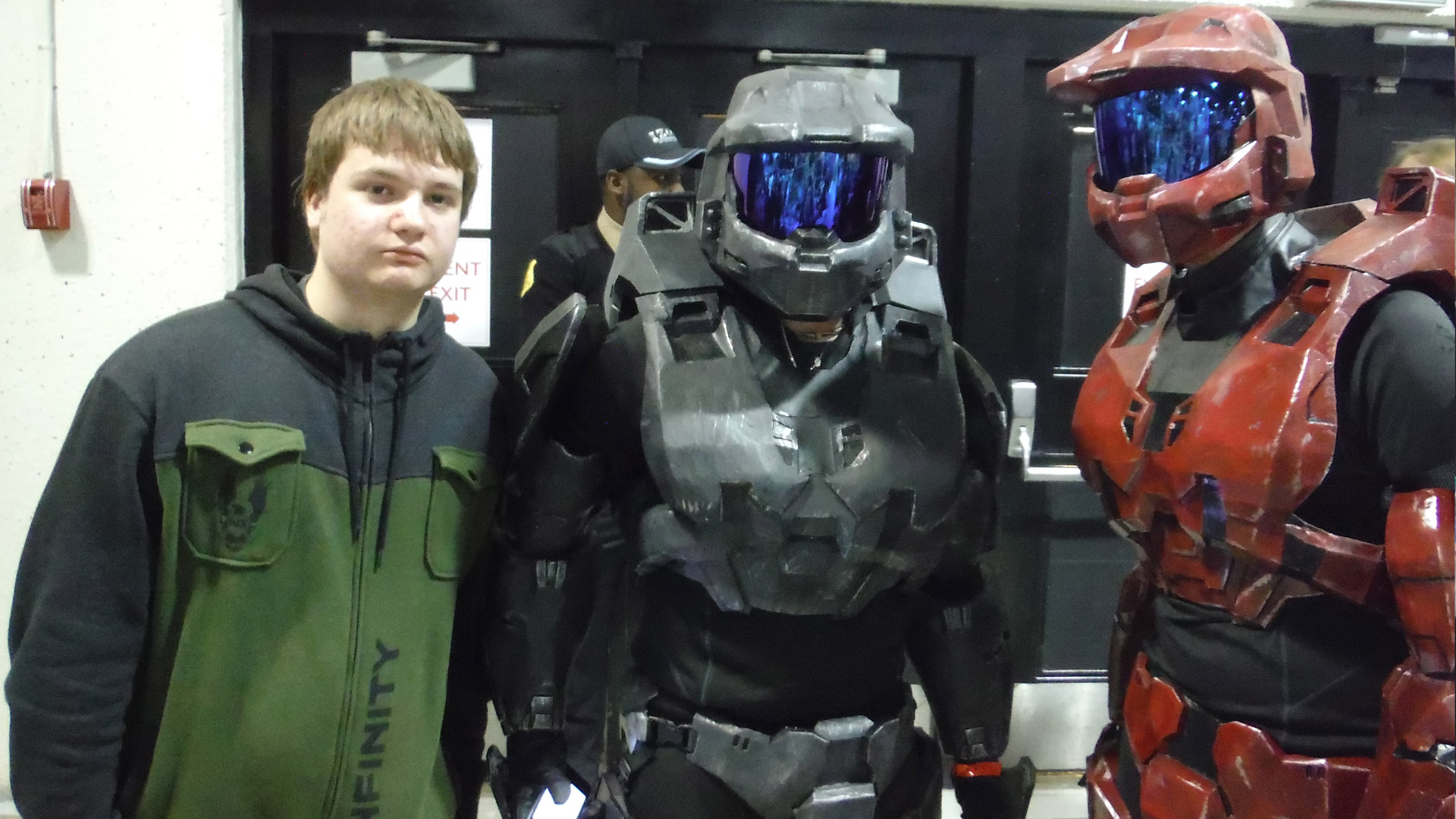 Yet again with the whole I love Halo thing going on, I had to get all the shots I could with Halo characters. I missed an ODST because he was on his phone, way to be slacking on the job! These spartans were happy to take the time for a shot which I was quite happy about. Really great suits of armor and I believe they said it took about two months to complete them. 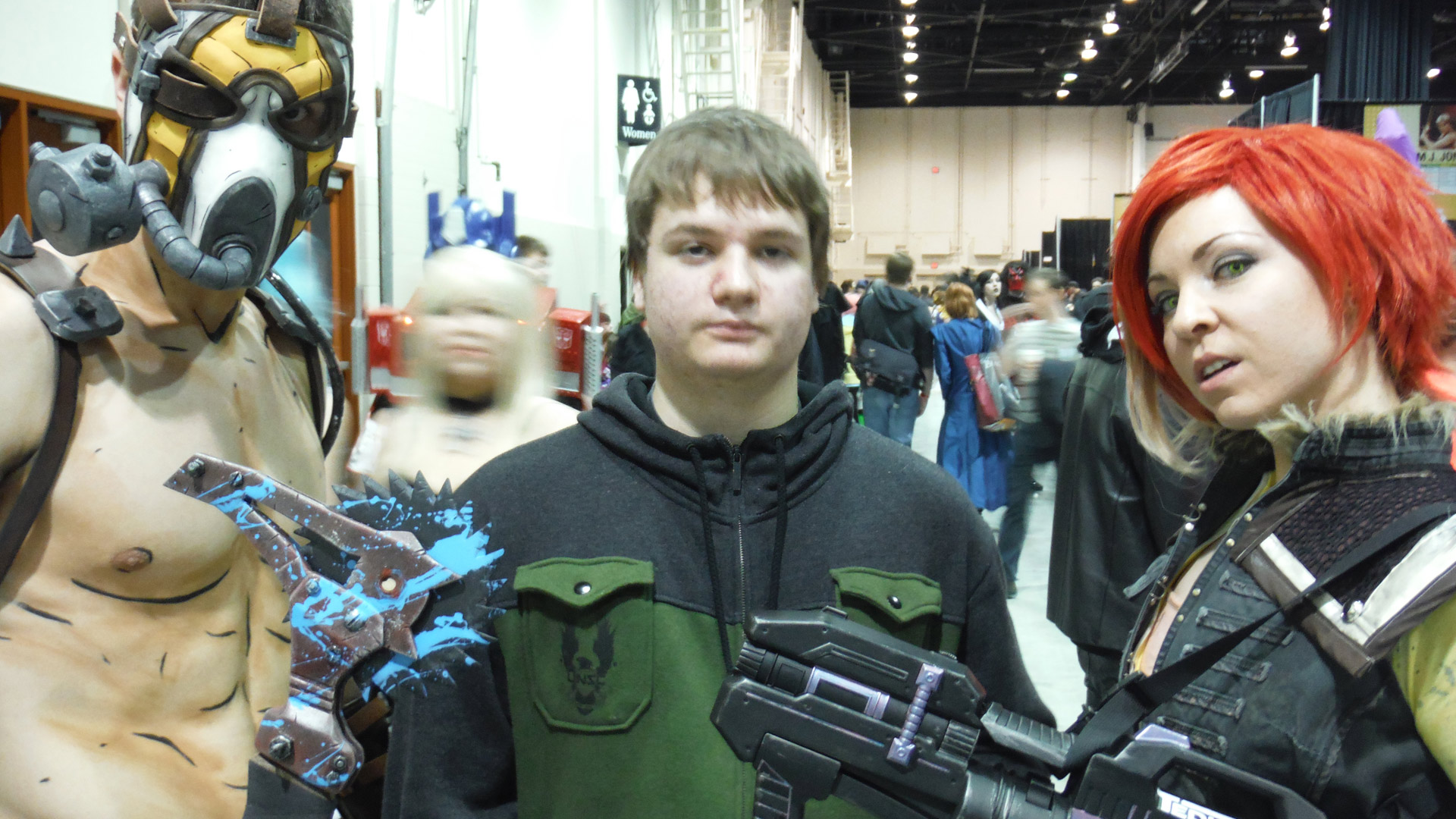 Unexpected and really a good coincidence as I was just playing Borderlands 2 DLC the night previous. Was able to snap a shot with the bandit in full cartoon art style and of course Lilith which was an absolutely awesome character in both titles. We even managed to capture a creepy blurred ghost in the background, spooky! 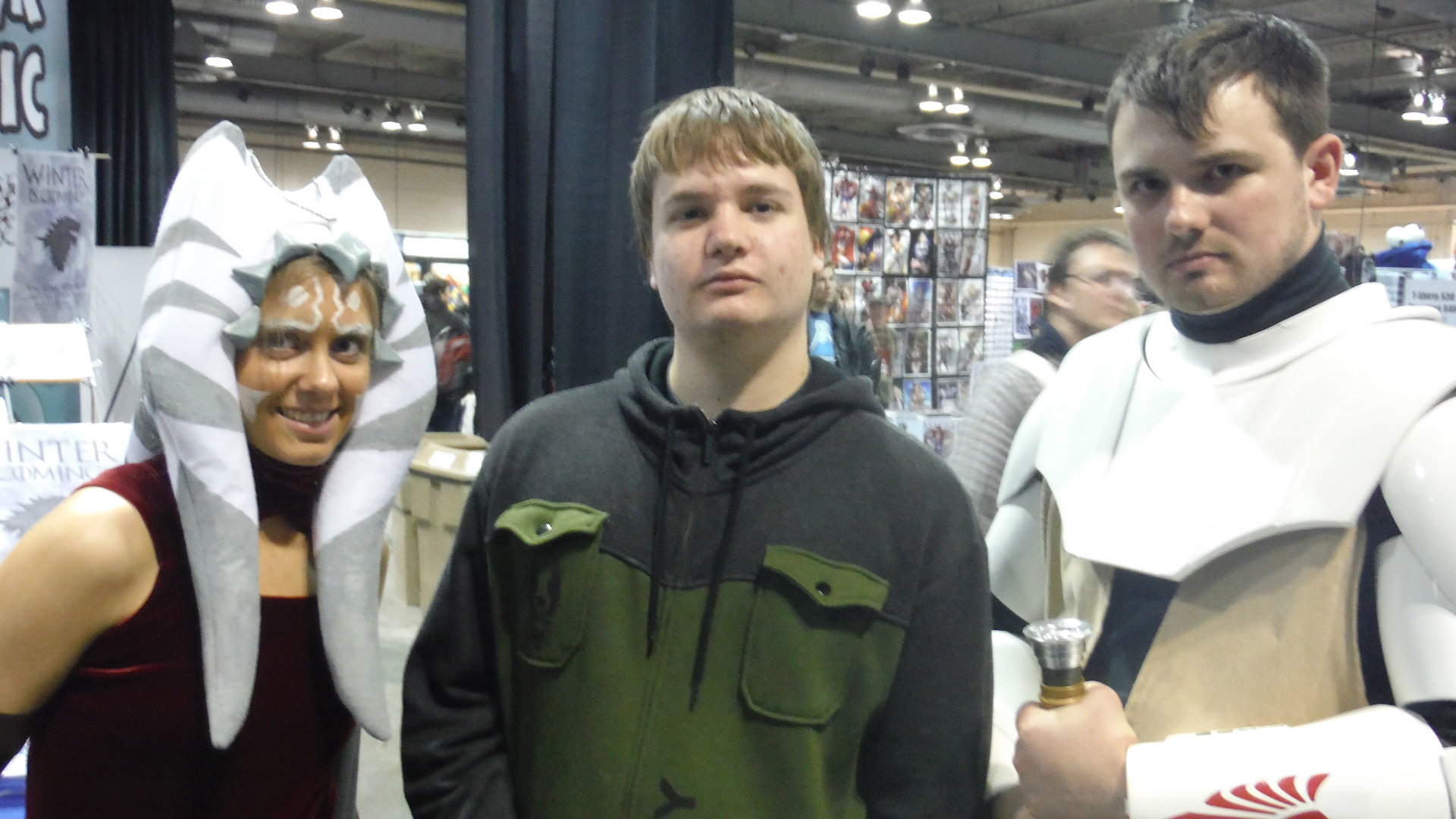 Quite a fan of the series after I finished it on Netflix recently was excited to get a shot with Ahsoka, along with a slightly more dark side twisted Obi Wan. I was also going to photoshop a saber blade, but yet again got lazy and just as is. Really well done and just like the show which I really wish has its story continued in some manner of sorts. 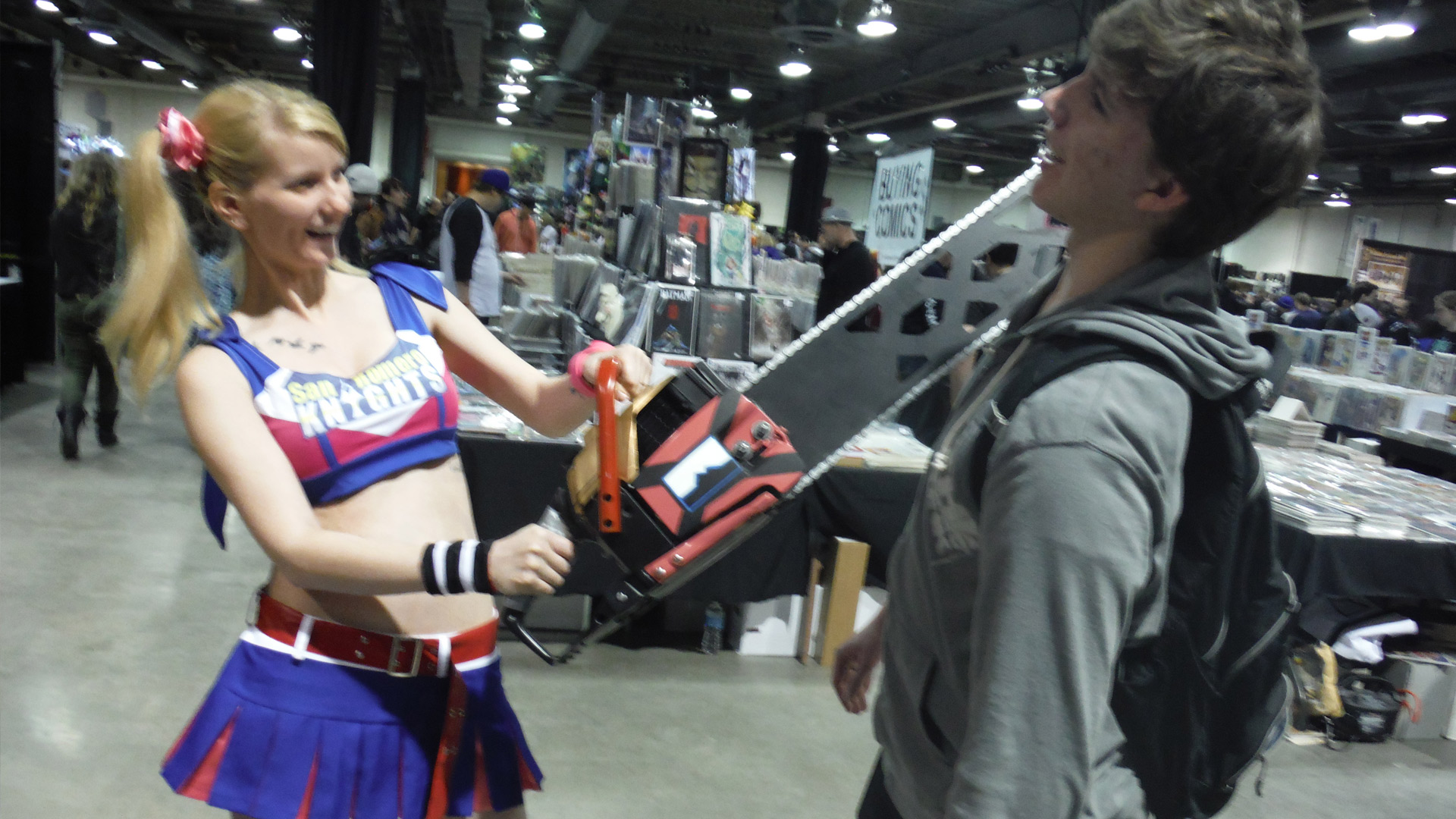 In the theme of killing Kenny he started a trend where many others wanted the chainsaw feature of getting cut in half, I also included my shot below since I'm narcissistic like that. Anyways it looks just like the Juliet, just because the game was awful doesn't mean I hated the characters. I only sorta did. The shot below also does give a better look at the cosplay, or at least I think so. 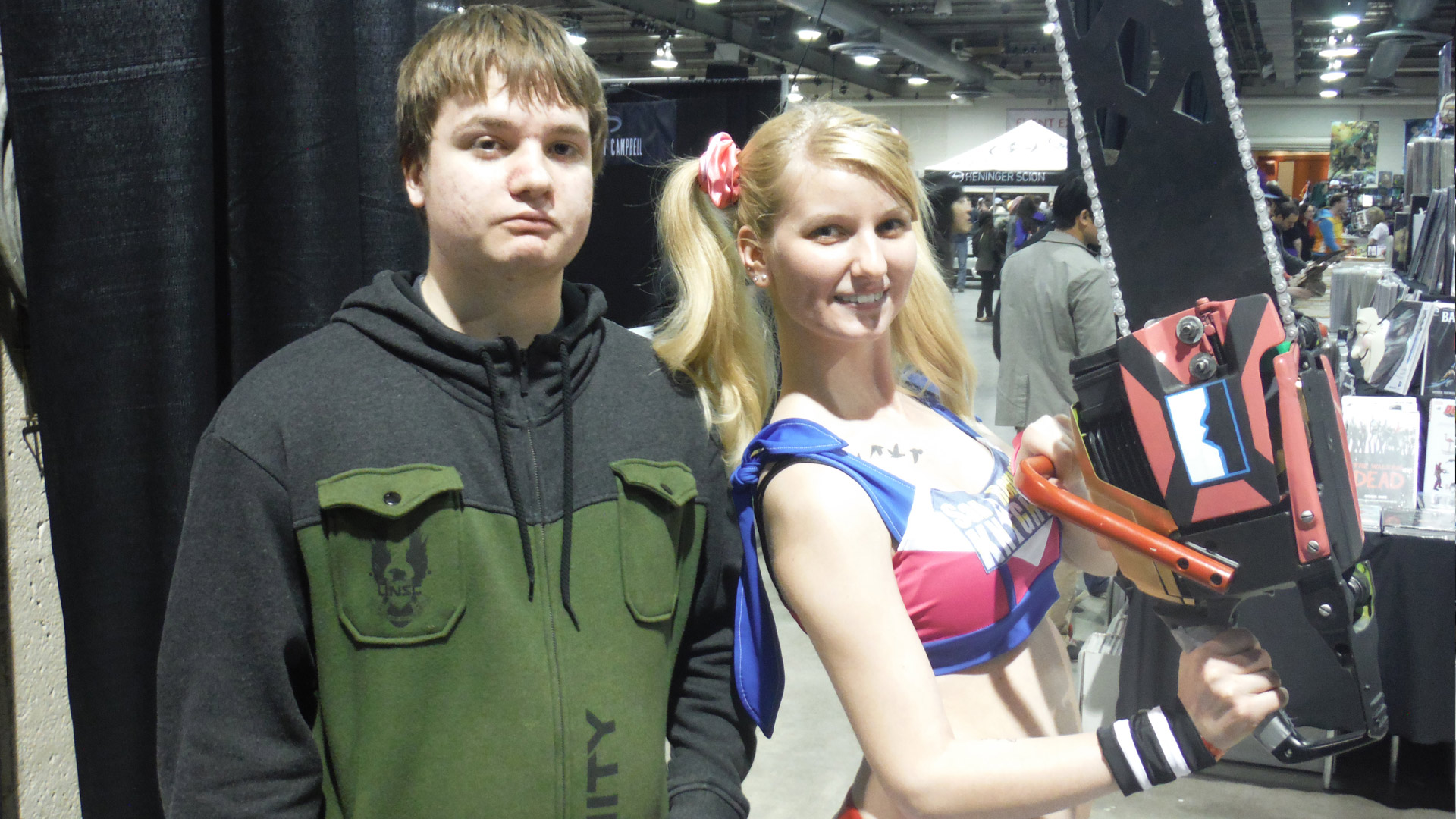 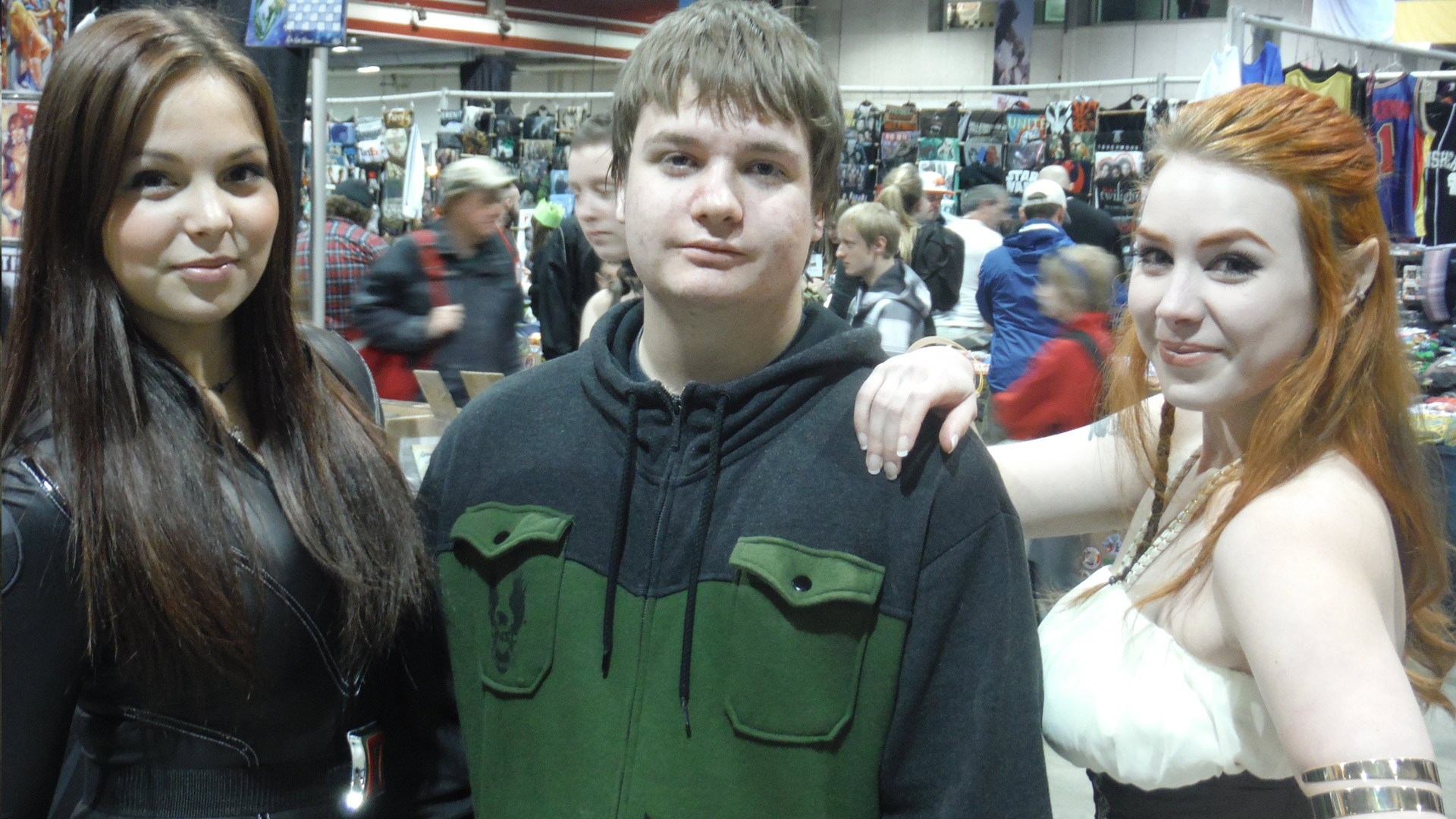 If someone could please fill me in on the other character? I know we go Black Widow here and the other lovely lady is from, Dragon Age? Anyways I'm smiling in this one since they got all friendly, a big change when the characters get more into it. Take it for what you will, really well done characters and a smile from me which is different from those other photos.

Wish I had a Portal Gun 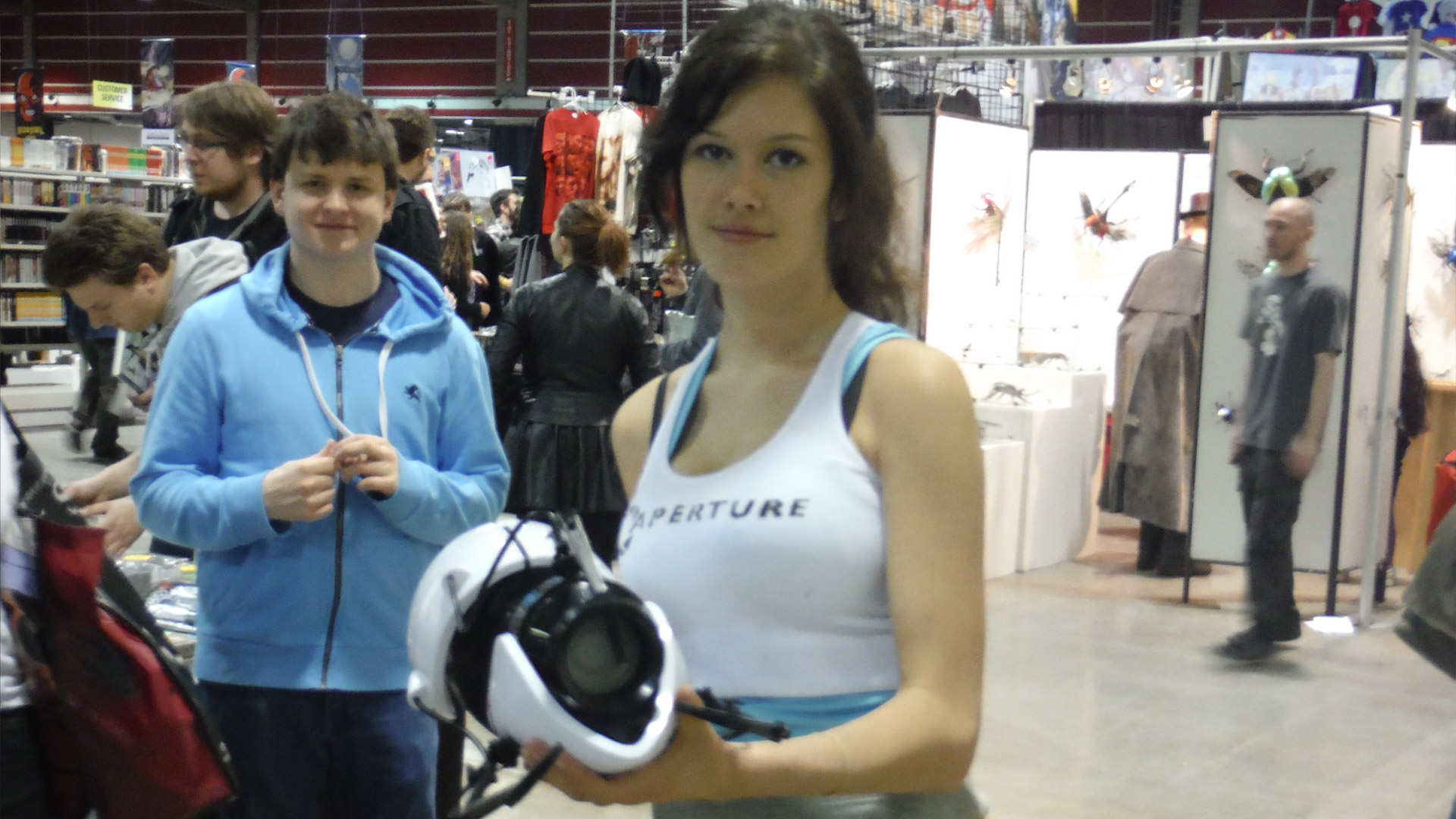 Originally I had asked to get a photo with Chell, but she just wanted a single shot I guess. Slightly disappointing as I had seen a Chell at the start (same one) and ran across her again however many hours later. Like stated before it was a very long day at the show going in circles, we saw a lot of the same over and over. Just like that Crimson and Clover song. Also look at that guy in the background, he's a little cheeky cause he got in the shot. 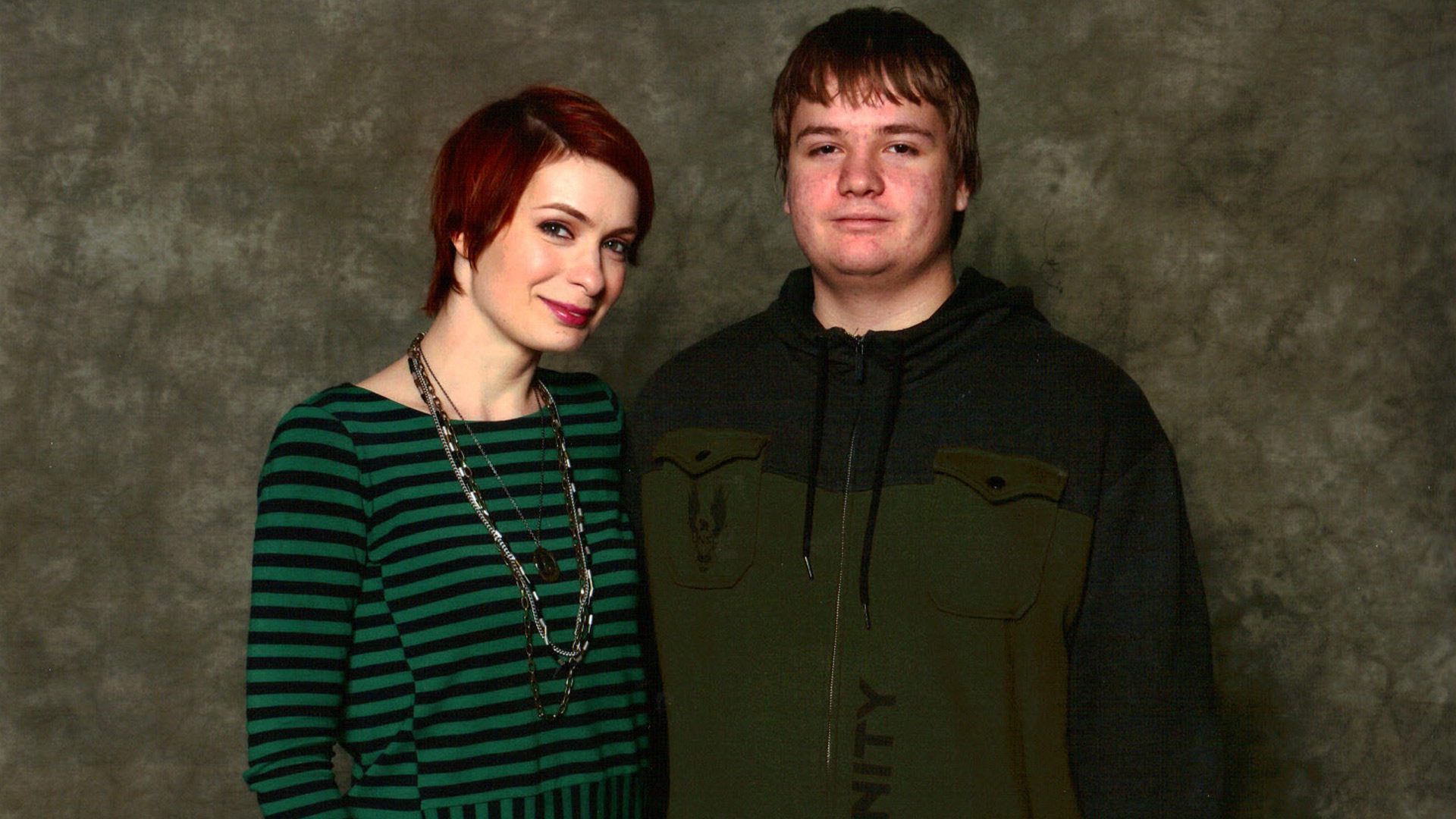 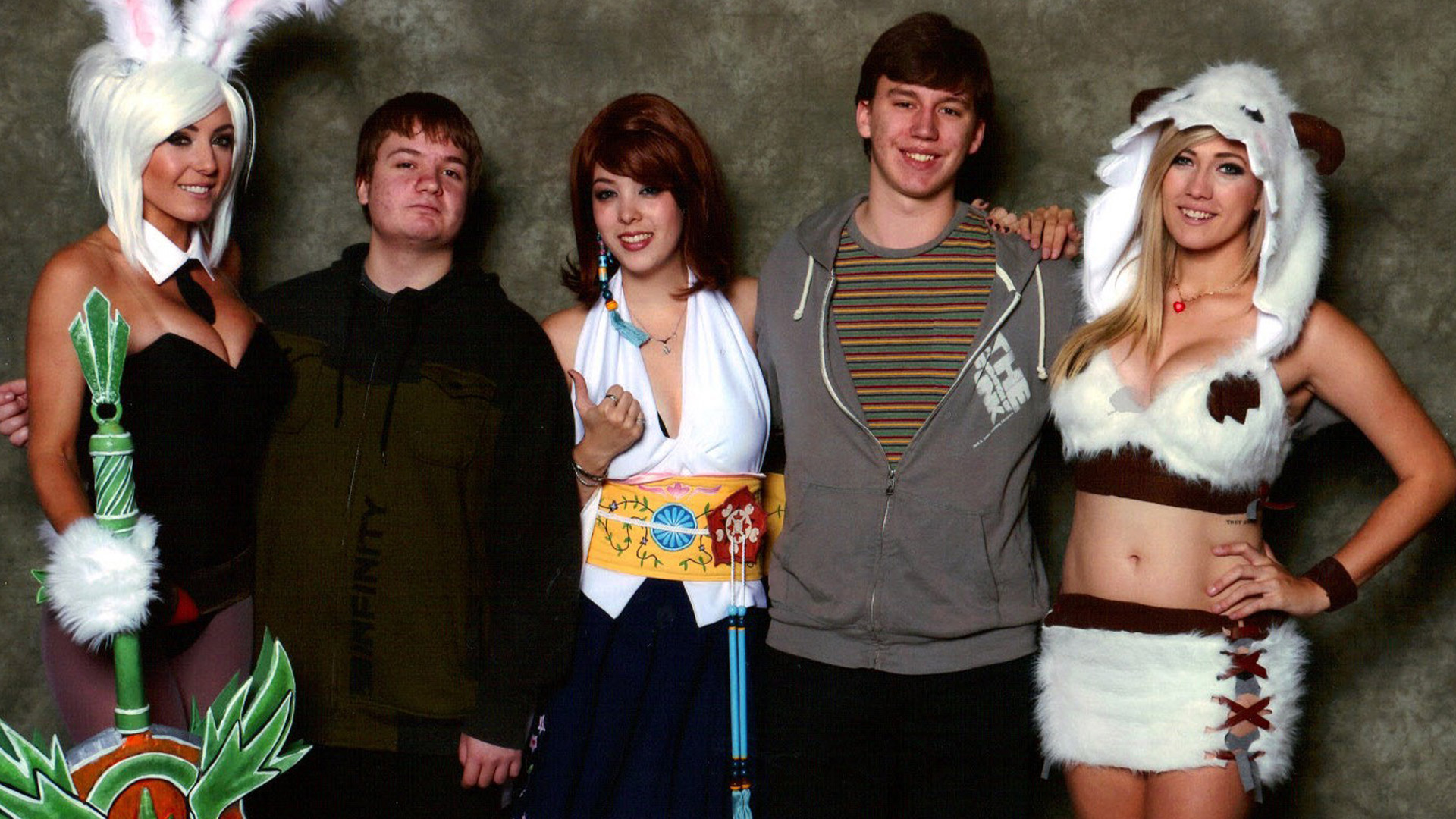 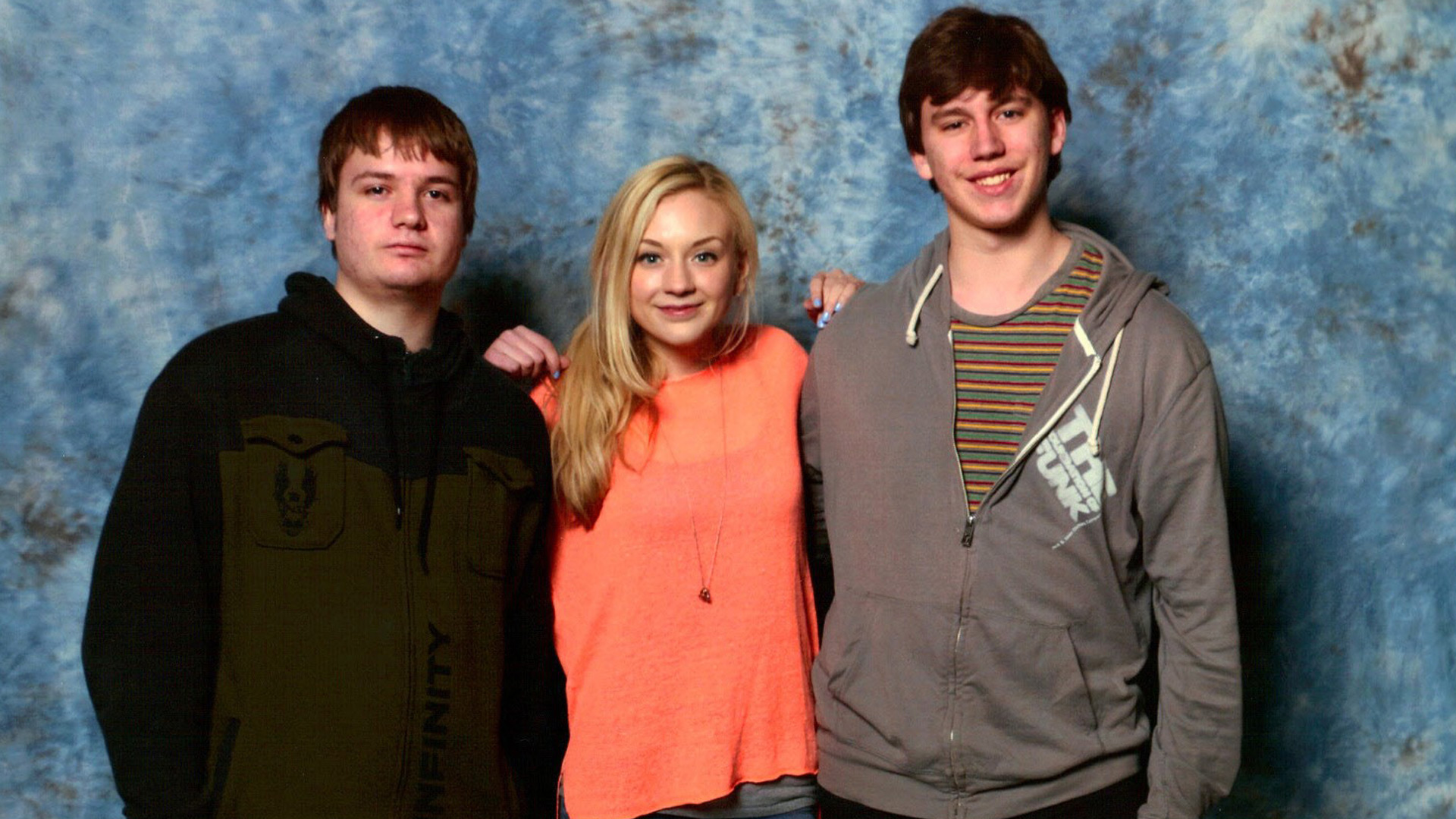 So for quite the cost we were able to get a number of photo ops with some special guests. Felicia Day was my favorite as that was my goal going to comic-con this year, was happy to complete it. Actually got somewhat stunned and was just silent to a you rocked that from her with me on my way. They really do try to file you out of there quickly whereas Felicia was nicer about it. The cosplay girls were apparently doing some League of Legends character as my sister told me.

The first one gave me a scratch as she was a Poro? which sadly I have seen the whole intense video for. The middle gave me a, look at this guy finger pose and I went from there. I think Kinney was really the most disappointing as she really didn't do anything, got our pictures and was out in like fifteen seconds. Which was strange since her line really wasn't very long and it was the end of the day. I suppose that also might have been why, just tired out from being there all day.

So there you have it, my favorite pictures and cosplay that I captured during the Saturday of the Calgary Comic-Con 2014. Hope you enjoyed this look and comments at the event, let me know if I should go cover next year which I will try a little better to. There may be a video linked below at some point which will be a montage of the photos with some video I took. It was a blast and am interesting to see how it changes next year. If you have photos to share and I get enough I might do some other sort of posting.