Studio Woe presented Gruff at the inaugural PAX Unplugged. A tactical combat card game, Gruff features mutated monster goats. Based on the children’s story, The Three Billy-Goats Gruff, where three goats defeated the troll that lived under a bridge. The shepherds came to realize that they had been using goats all wrong and used black magic and science to weaponize their goats. Thereby creating the fattest, weirdest goats around making them duel to the death whenever they could. Gruff is a self-contained card combat game with everything needed for up to four players to play. Available expansions simply add more to the world of the base game.

The first standalone expansion, Clash of the Battle Goats, adds six new goats, six new shepherds and some Legendary Goats that modify the base cards for the creatures in Gruff. Each game comes with fifteen goats and the game starts with choosing eight cards for the herd which are shuffled to create your deck. The Shepherds have different abilities to buff their herds and a threshold ability that triggers after they have taken a certain amount of damage. Tactics play a large part in Gruff. All goats start in their respective lanes. Goats may only attack head-on, so the strongest goats try to attack the weakest defender. Damage occurs at the end of the defenders turn, so the have a chance to counter the attack preventing a who goes first wins situation 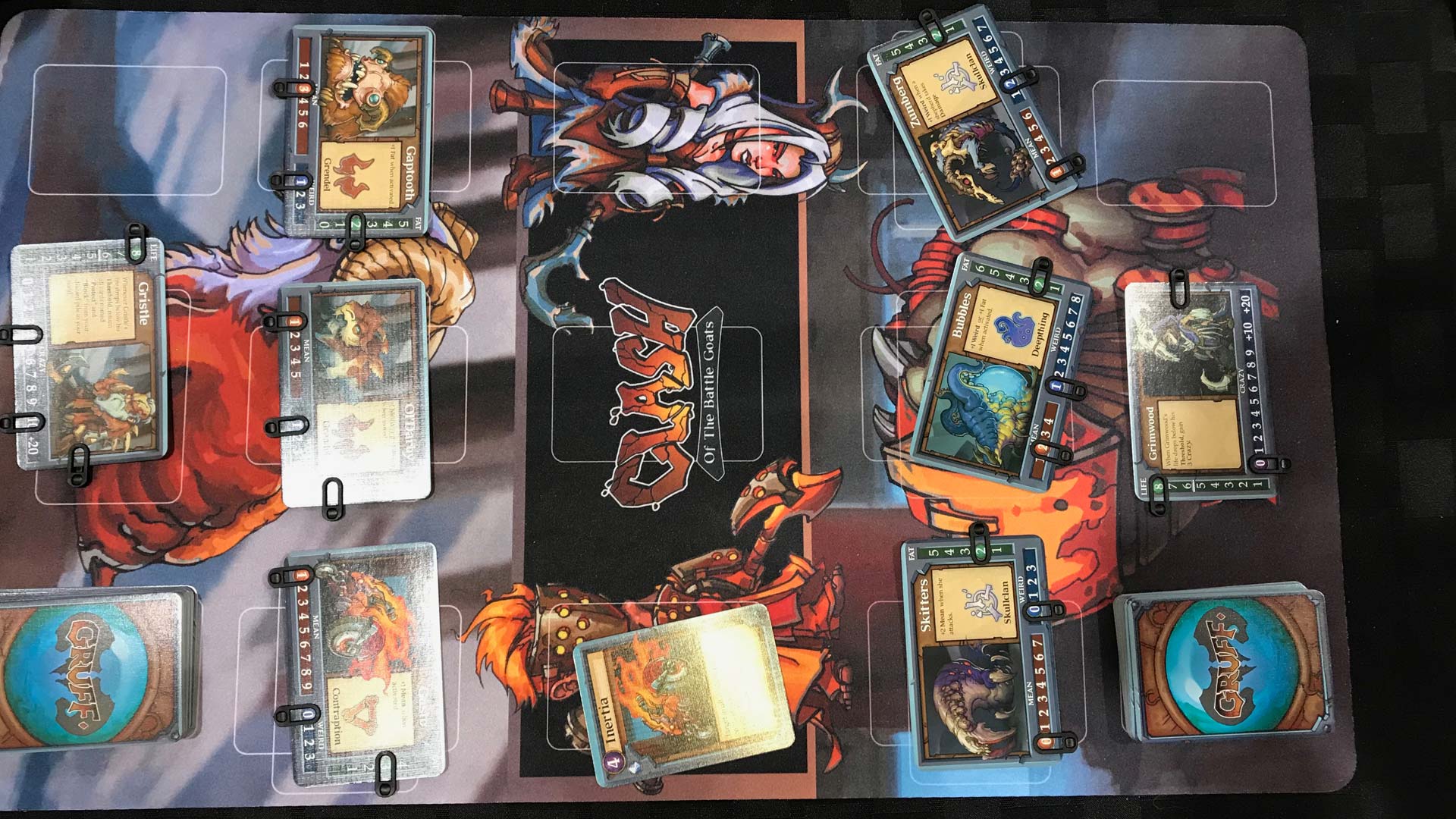 The brand-new expansion, Rage of the Trolls debuts at PAX Unplugged. This expansion adds coop and single-player modes. The backstory is that after the Troll were defeated they went into exile, now they have returned with a vengeance. Players can fight the trolls cooperatively with a friend or as a single player campaign. Rage of the Trolls may also be mixed in with the base game to be played competitively. The Trolls may also be played against the goats in the universe adding a whole new dimension. The next planned expansion is The Stuff of Nightmares adding a new faction of plushy nightmare goats called Stuffkin.

The idea is that nightmares can coalesce into your stuffed animals becoming these monster goats which then become part of your arsenal. Stuff of Nightmares will be coming to Kickstarter in the June or July of 2018. A new project from Studio Woe is coming to Kickstarter April or May of 2018 is Pirate Tanks of Skull Rock, a dexterity game of pirates that have acquired tanks. The story being that long ago in 2007, pirates seize a freighter full of Russian T-72 tanks and proceed to have an epic game of capture the flag. The pirate tank pawns are flicked around the board trying to capture the enemy flag and return it to their base.