You have become a mystical creature in a whimsical land, where you have discovered these little white creatures that are roaming around and you decide to follow them. Twisting and curving your body into different positions you will guide the little creatures from portal to portal safely or they might die from a number of things from falling, to spikes or even clamps pressing on them. There are many levels within the story to play through, each varying in design and layout of possible threats for the creatures. The creatures are a very simple AI that basically needs you to be there for them from portal to portal, as they will just walk into walls and move the other way not caring what's around them. Once you collect one or maybe even a few of them, you will have to take care in moving your body as in not to squish them or throw them into danger. At times you will have to move the clamps with one arm making sure the creatures don’t run off your body. Then you will move and let them run into the portal or push them in, aside from the single player campaign there is also a multiplayer one that differs in level design. 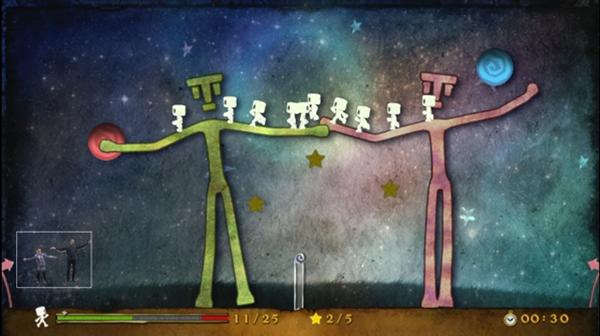 The games multiplayer deals in a coop experience way offering a series of levels that differ from the single players ones built around using two people. Now that’s fine, but I found the multiplayer to be awkward at times as the home portal spawns on peoples bodies, and well the crotch an awful lot. Anyways like most Kinect games it may spark some interest at a party, although yet again I feel just awful when my teammate drops one of the poor little creatures

The game gets you to use your body and shape it in any way you seem fit in order to get the little creatures to safety. Every little move you make is tracked well on the screen and the different ways of picking them up are awesome from them jumping from the ground to your hand when you tilt or how they slide if you put your arm at an angle. Along with that the menus are well done and very easy to transcend through.

The game is surely an interesting one, and I quite enjoyed guiding the little creatures to safety, but felt bad when one of them got squished or I accidently propelled one of the map. There are many levels in the campaign for you to do and lots more if you have a friend. You will play this game a couple of times and it will provide some entertainment and is a nice cheap game to play on the Kinect that’s shows well what the Kinect can do. 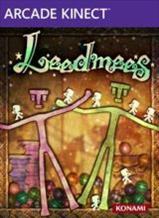