In a beautifully gorgeous world you land and begin your path through the building that lays before you watching the hopeful folks wave their guns triumphantly through the air. It gives off the idea of a linear game with some immediate humor as some random scientist is being chased by an alien bug sort of creature. Anyways, you move onward and are faced with a tutorial style tower defending mission. Creating a series of basic towers and wall covers you fight a few simplistic waves of enemies. From there out it ditches any sort of campaign like gameplay and gives you tower defense mixed with some before comics to tell you what is happening in the story progression. Aside from that it truly focuses on you defending this core from waves of creatures while playing a dominantly active roll with me finding that despite the best layouts these defenses do not help much. It really is all about leveling your character to achieve the best tiers of weapons and turrets. Grabbing drops of points each round you will attempt to shape the playing field to your advantage in order to assist you in mowing down the oncoming force. It’s an enjoyable experience with managing things always being interesting. There’s a few characters for you to choose with minor differing abilities, along with some perks to choose as a bonus to help further. I will go further from all this to say that the game does have a rather interesting level of difficulty, the online teammate option is also available (up to four) though that really doesn’t help at all and that’s if you can get into a functioning team. The creatures are your true enemy though in this mess with a fair variety, though some of higher tier are particularly tricky to take out and may be the only point of devastation. Shoot the brain ones! 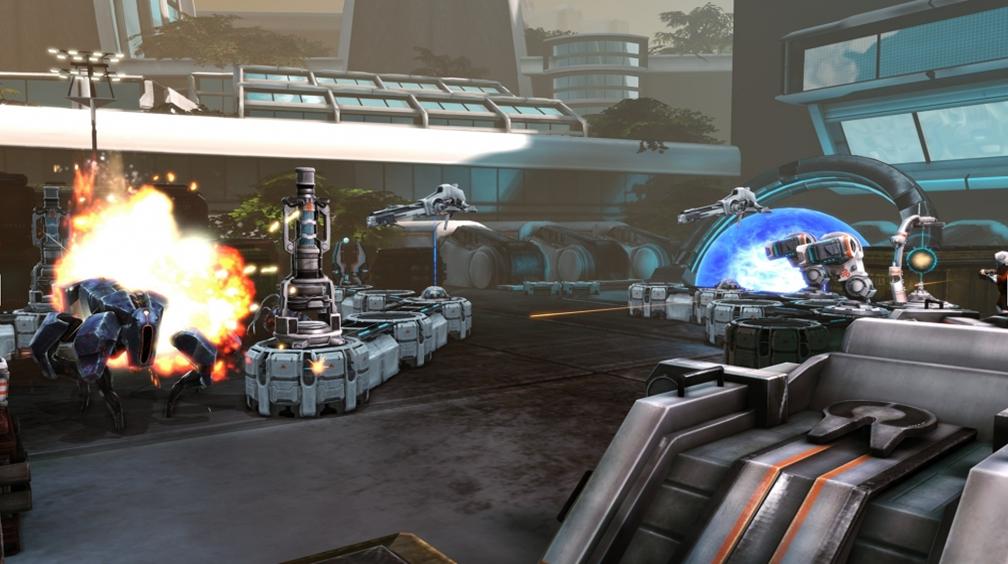 Featuring a blend of tower defense and player interaction you build an interesting set of varying towers that have mines of lasers to help hold the line. The environments and graphics are actually really beautiful with a unique style of tower design. It is really neat how they form together into big chunky block futuristic styled walls. The guns you posses are fairly neat, though I will comment that I didn’t care for the reload style since it didn’t give feedback that I'm used to.

Sanctum 2 is an interesting title for the more hardcore of tower defense individuals. I would not suggest a more a casual player to attempt, though there is good challenge for those that want to face it. Best of luck trying to get matches online unless with good friends or luck. The game looks beautiful and does a good job at what’s made to do, that being an strategic core defending game.

Sanctum 2 for Xbox 360 and Playstation 3